Final Fantasy 7 Remake – What do we know so far? 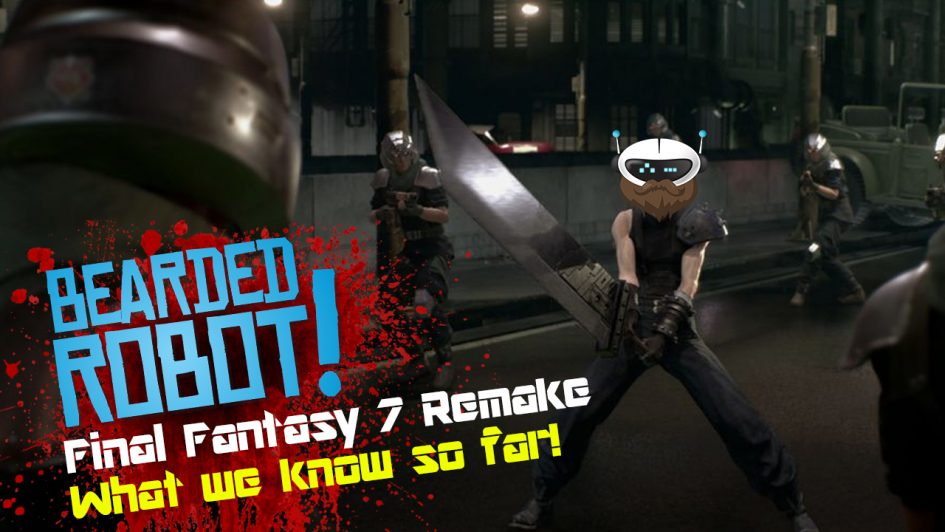 Well it’s been 21 years to the day that the wonderful, amazing, heart-stoppingly phenomenal Final Fantasy 7 was released on Playstation and what better way to mark its anniversary than an update on where exactly we’re at with the remake!

Final Fantasy 7 brought many fans a gaming experience like no other and I for one was one of them. It shaped me into the gamer I am today, defined a genre which I know and love and will do for as long as my thumbs will allow me; and opened up a gaming series which I now call my favourite of all time. Gamers older than me will appreciate the FF’s that came way before VII, but being 31, Final Fantasy 7 was the perfect game released at the perfect time for my generation and it lives on as my favourite game of all time, to this day. Games like Mass Effect 2, The Last of Us, Witcher III, Lost Odyssey, GTA Vice City, Final Fantasy 8/9 and many more are games I hold up there with the best games I’ve ever had the pleasure of playing, but still, nothing manages to come close to the feeling I got from playing as Cloud and AVALANCHE in SquareSoft’s (at the time) epic RPG.

As massive Final Fantasy fans would already be aware, the “announcement” of a Final Fantasy 7 remake can be traced all the way back to a PS3 technical demo. All the way back in 2006, we heard the music, we saw the pictures and ever since have been waiting patiently for a remake to happen. Of course it was just a tech demo in the end and left quite a few fans extremely disappointed. However at E3 2015 (9 years after the demo) we did finally see the official announcement that “most” fans wanted.

It’s not quite the announcement I would have directed, but hey, that’s just me. None-the-less it was finally announced that it was happening and we’ve been waiting for details ever since. Details which have been few and far between and details which also give the impression that it could be another 9 years before we see the bloody game. Of course I’m exaggerating, but you know what I mean. Anyway let’s get into what we know so far!

THE RELEASE DATE
We’re yet to have been given an official release date for the game although it’s likely that we’ll see something announced at this year’s E3 event in June. It’s also likely that we could see a release date around the end of 2018 or early 2019. Whilst that still seems a way off, it also remains to be seen whether it’ll be worth the wait.

EPISODES?
There are also strong rumours that the game will be released in an episodic format, which of course has some gamers up in arms. I for one aren’t completely against this, having experienced recently an episodic format in the form of Hitman. Whilst at first I was sceptical, it really did increase the longevity of the game and really give the creators enough time to perfect every slice. It also meant that I was given enough time to 100% the parts I wanted to, without feeling too rushed. Assassin’s Creed Origins for example was such a giant game, that in the end I couldn’t bear to play any more and I actually saw that as a negative. Had this been released in chunks, perhaps it would have left me with a taste for more, whilst giving me the opportunity to explore other games rather than being consumed by one.

Having said that, if a game is good enough you will spend 80+ ours on it regardless, just like I did with The Witcher 3 and GTA V.

Perhaps releasing the Final Fantasy 7 remake in an episodic format, will leave you wanting more as well being able to play chunks of the game which have been meticulously crafted, as opposed to rushed to hit any kind of Fall/Christmas deadline etc.

RECENT CONCEPT ARTWORK SPOTTED
At a recent Final Fantasy 30 year anniversary event held at Mori Arts Center Gallery in Tokyo, screenshots of concept art can be seen pictured. You can see them below.

Whilst this doesn’t tell us much, it’s pretty cool stuff and shows us that something big is coming. Credit to Twitter user @jsjunshen for getting the pics.

GAMEPLAY IS CHANGING
It’s happening, get with the times! I do understand that some fans however will be a little disappointed that the remake will feature a combat system which is probably more similar to Final Fantasy from 12 onwards, but I do honestly think that’s not a bad thing. We all know that anything from 13 onwards is simply not great, however this also means that Final Fantasy XV gets a rough ride as well and is unfortunately clumped into the handful of “new age” Final Fantasys which are simply not great (in my opinion), however also in my opinion Final Fantasy XV is a wonderful game. Extremely tense, emotional and in terms of combat and very decent system which I really enjoyed playing. Final Fantasy XV is a conversation for another time, but my point is, if the remake does feature a combat system with a likeliness of FFXV, then I for one am excited about that prospect.

Again I would go into the the tonnes of reasons why the FFXV combat system is really good and also throws-back to turn-based battles, but we don’t know for sure what the battle style will be for the 7 remake. All I will say though, is if it is in the style of XV, don’t write it off yet!

So overall the key points to take on combat are: 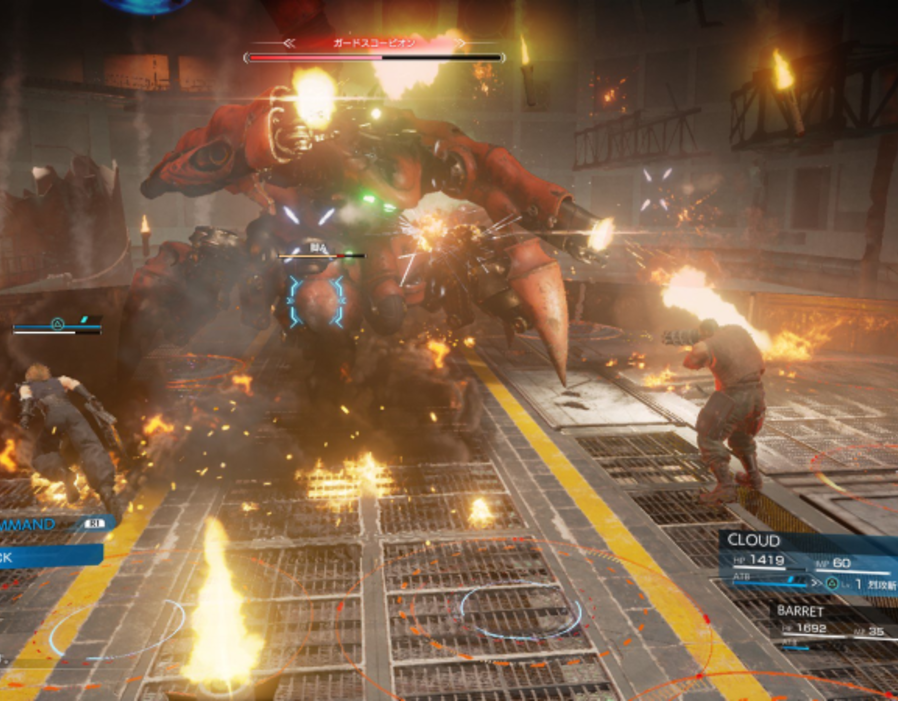 STEALTH WILL FEATURE
Again, because we’re moving with the times and gone is the upper camera style (technical term there) not only will the combat style change, but so will the exploring mechanics and again with reference to Final Fantasy XV, this may not be a bad thing. We’ve seen in some of the short pieces of gameplay shown that stealth will be a factor.

There were elements of stealth featured in XV which worked really well, allowing you to get to higher ground and assault enemies from above and behind dealing significantly more damage. This style certainly lends itself to parts of Final Fantasy 7 brilliantly. Just imagine exploring an entire reactor, stealthing when required and engaging in exciting action pack combat when you feel like it. Again, being a big XV fan, I could see this working really well. 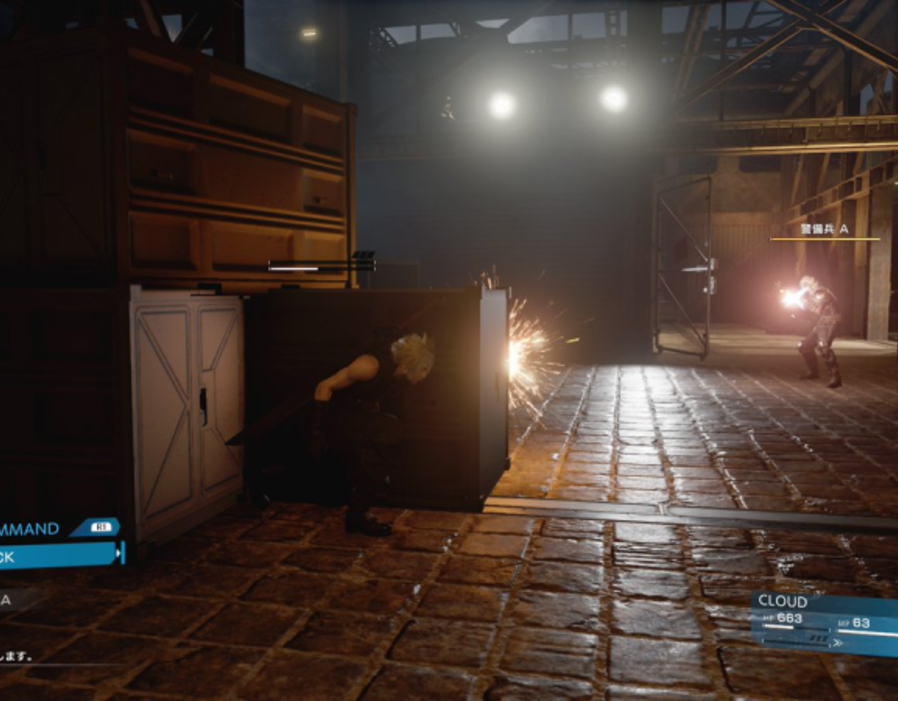 A PICTURE CAN TELL A THOUSAND WORDS
Taking all of the above reagrding gamplay and battle style into account, let’s take a look at this screengrab. 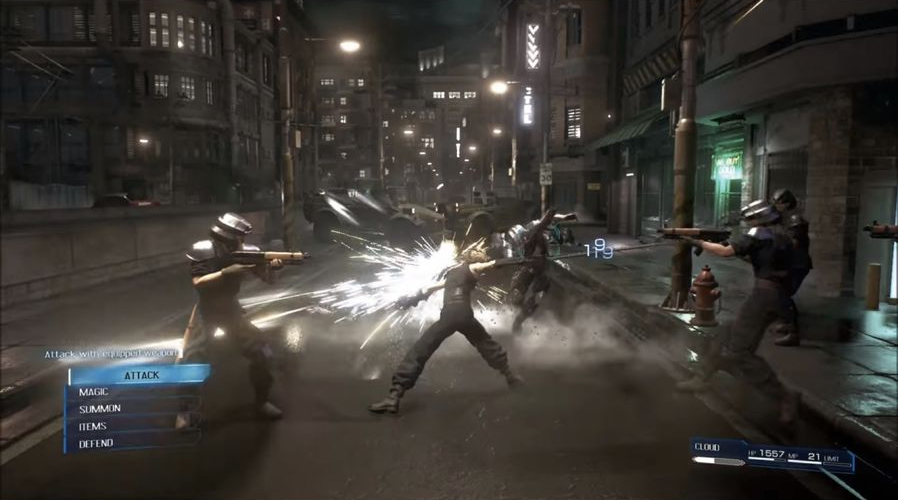 On the face of it, it looks like a simple action packed battle sequence, but let’s dissect it together.

Magic: On the bottom left we have our classic HUD for directing what we want our character to do. Magic being featured is a massive plus, especially if we’re given old school terminology for it like Bolt 1 and Bolt 2. Yes! There could also be a feature within settings like (again like in XV) where you can stop time whilst exploring your menus, so the idea of stopping the entire fight to scroll through your magic and then attack with it, excites me.

Summon: It goes without saying that Summons in any FF are essential and it’s nice to see they’ll exist within the 7 remake.

Cloud bar: The bar below Cloud’s name looks like it could well be a metre to define when he can attack, which could be a throwback to the original’s turn-based style, but I could be wrong here. I’d love to know your thoughts?

Limit Breaks: Oh yes! Limit Breaks were one of the best features in Final Fantasy 7 and to see a limit bar on the HUD excites me a hell of a lot.

HUD: The HUD itself looks really tidy, I like it a lot and it does give me that 7 vibe when I look at it, just slightly more modern, which I’m all for.

Finally, one last thing I’d say about combat; who will be play as? It does remain to be seen and if I did have a criticism of XV, it was that you only really played as the main character Noctis, which always slightly irritated me. I’d much prefer it if they went back to that FF12 style where you could control any character at any time and choose what you wanted them to do, or even a turn-based style would be nice (which I won’t hold my breath for).

Well, that’s all I really know about the remake and if you know anything more, be sure to leave it in the blog’s comments or on our social channels. We’d love to discuss it more with you. I for one am extremely excited about a Final Fantasy 7 remake and although I understand why fans of the series would be extremely sceptical (my counterpart Danny being one of them), I’m holding out hope that they get it right. With the correct blend of new-age mechanics and enough throw-backs to an amazing system in the original, it really could be a special, special game. 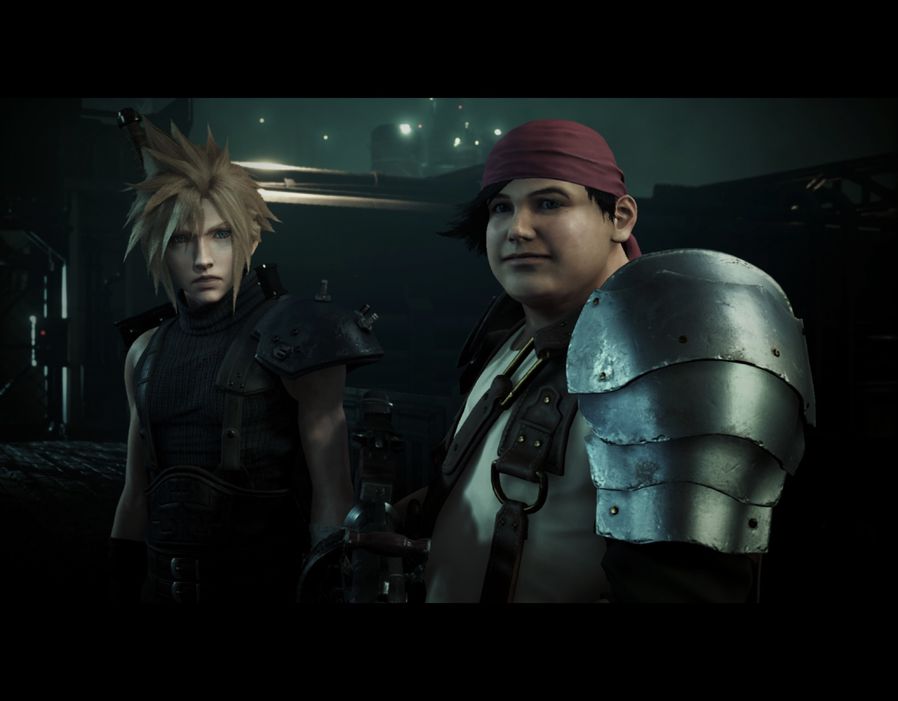