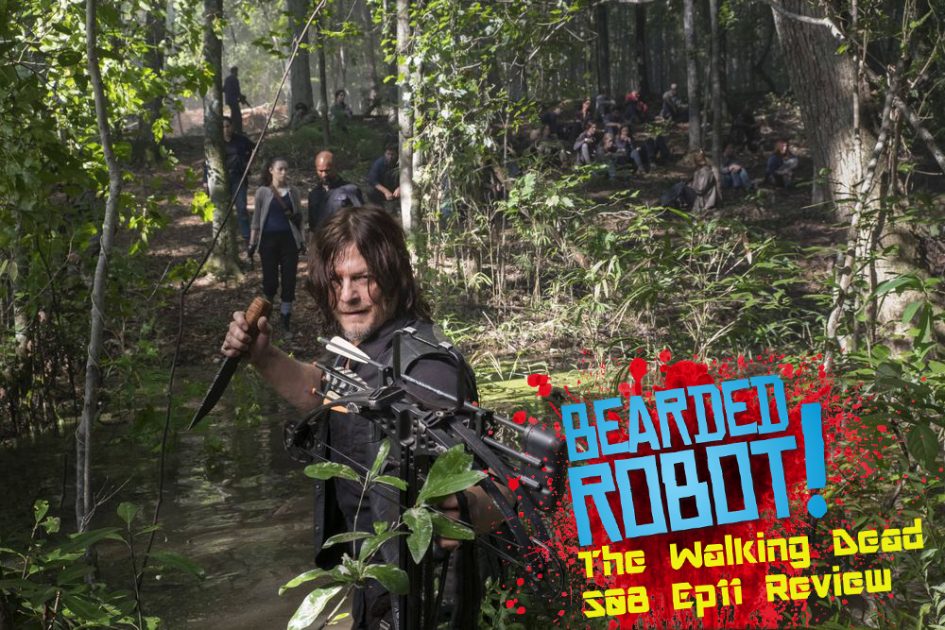 This week’s episode of The Walking Dead returned to its usual slower pace, as the war against the Saviors took a little time out as either side dealt with various issues on the home front. By the end of it though, in the build up to the finale in a couple of a weeks time, we can see what up and coming threats face the remenants of the Alexandrian/Hilltop/Kingdom militia as Negan unveils his big plan to finish off his enemies, but more on that later.

The episode begins with Daryl and the remaining survivors of Alexandria avoiding Savior patrols as they make their way through the forest (always a forest as the land the show is filmed on features a lot of woodland areas, so they need to make the most of it) towards the Hilltop.
Tara reminds us here why we do not like her one big, and her and her frumpy hoodie, are not shy of expressing her hatred for Dwight, who is currently tagging along for the ride. She allows a Walker past her in hopes that it will bite him, but Dwight takes it out. After which she asks why he is still alive after everything he has done.
Now personally, I quite like Dwight and, even though Tara and Denise are regarded as “goodies”, I did not like either character and am crossing my fingers for the day when Tara will meet a similar fate as her girlfriend.
Sure killing Denise is going to make Tara pissed, she has every right to be, but I do feel like maybe Dwight should be cut a little slack. If you want to kill him, fine. Just get on with it so we can stop hearing you bitch about it all the bloody time! 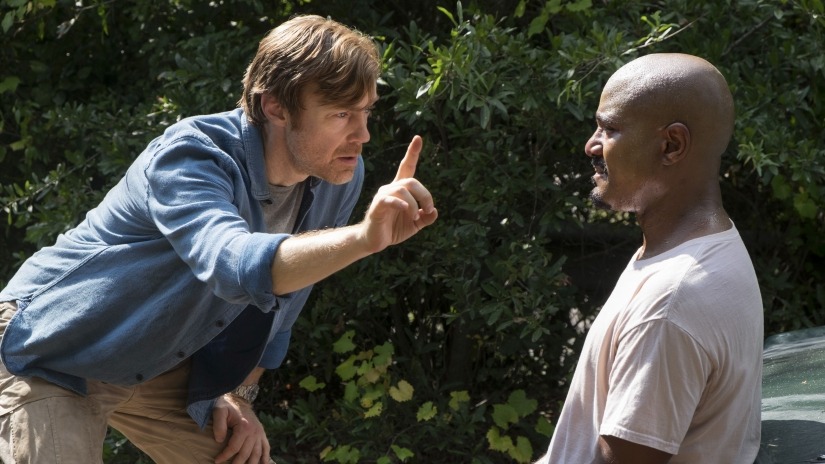 This is one of the main stories of the episode as we see the remaining Alexandrians traversing through a dangerous swamp (which according to Dwight, Negan won’t even send his people through) in order to avoid detection and get to the Hilltop safely, all the while tension is building between Tara and Dwight.
The group decide to traverse the swamp, only to have to fend off Moss-Zombies, who have been residing in the swamp for what must be since the beginning, while Tara keeps an eye on Dwight on the shore as the others clear out the Walkers.
Her dark thoughts of murdering Dwight get the better of her as she orders him to help her clear out a nearby pack of stumbling corpses, but uses it as an opportunity to try and kill him. He makes a break for it, with Tara in pursuit, but runs into a patrol of Saviors. Dwight makes an excuse for his absence (following the ambush on his convoy after the Saviors attacked Alexandria), which Tara overhears and realises that he is actually on the good side and he has been telling the truth. Throughout this episode Tara and Rosita have been giving him stick as he tried to prove himself that he is on their side, and this was the moment that a few of the sceptics realised, as Rosita catches up to Tara and overhears Dwight leading them away from the rest of the survivors.
It means Dwight is back in Negan’s fold, but he is not spilling about what our heroes are up to. But an friend within the enemy lines is always worth having.

Another story follows Doctor Carlson (originally from the Hilltop but held captive by the Saviors) and an incredibly sick Gabriel, following Eugene helping them escape from Sanctuary in order for Carlson to go back to the Hilltop and help deliver Maggie’s baby when the time comes.
I don’t really remember WHY Gabriel was sick? I remember that he was sick, but I have no idea what actually caused it. I seem to remember Gabe and Negan in the trailer together, and he was perfectly fine, then the next time we see Father Gabriel, he was dying of some unknown illness and has been ever since.
Anyway, the illness is getting worse and it is now affecting his eyesight. Don’t ask me how… I am not a doctor. But Carlson is, so he says its affecting his eyes.
The two of them break down and come across a shack in the woods where they are able to rest for a short while. Here the duo have a little back and forth about faith (as you always do when you are with a heavily religious person because what else do you talk about?), and naturally Carlson is a bit of a sceptic, as always, but after the discovery of the pills Gabriel needs to fight the infection, as well as a few other miracles that occur, it does really seem like the Padre does have God on his side.
It was quite a nice couple of moments as we do wonder how someone can get so lucky, without the help of divine intervention.
After discovering the previous owners keys and a map, they set out to find the nearby vehicle, when Carlson treads on a bear-trap as a horde of undead swarm in. Gabriel’s manky eyes failed to notice the “TRAP!” sign in time, and now it is up to the almost blind religious black guy in a post apocalyptic wasteland (no… not Denzel Washington from The Book of Eli) manages to find Carlson’s gun and save his life.
There is a moment afterwards where the two of them are laughing, and it looks like there are a couple more dead ones moving in, which the survivors appear to not be phased by, but I think, on reflection, these might have been stuck in other bear-traps. 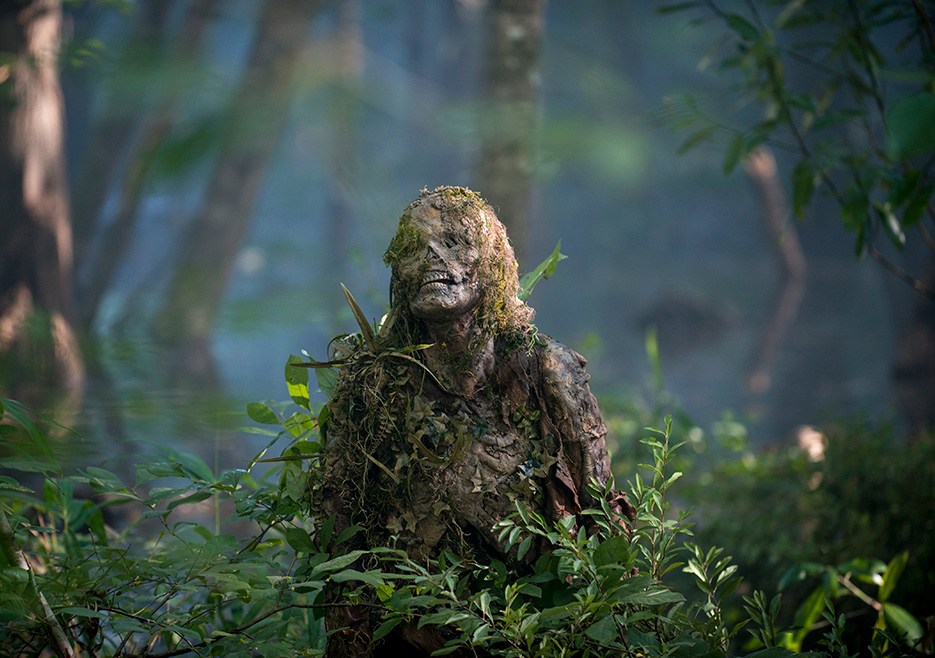 I really like the effects of the Walkers this week as the Bear-trap zombies had a lot of fungus and stuff growing off them, and mixed with the moss covered swamp zombies, we got a nice little variety this time around.

When Carlson and Gabriel get to the car, they are ambushed by Saviors who put them in the back of a pick-up truck. Here Carlson is starting to be a little more understanding of Gabriel’s faith and starts to believe that God will show them the way. At which point he attempts to grab one of the Saviors’ guns, only to be shot and killed by another. We see Gabriel sobbing as his optimistic outlook is ultimately what got the good doctor killed.
It’s a bit of a shame as I was quite enjoying the buddy duo adventures. There are a lot worse people who get more screen time that they do, and I was really into these two characters working together before Carlson’s untimely end.

At the Hilltop, supplies are running low as Maggie is adamant on keeping the Savior prisons alive and well fed, against everyone’s wishes, however, her people must come first as she tells one of the Saviors asking for some guarded time outside the pen, and now the prisons (including Gregory) must go hungry.
We get to see the baby that was orphaned by Rick and given to Aaron to take back to the Hilltop in a crib in Maggie’s office as she holds her stomach thinking of her own little life she has growing inside of her, which was quite a nice little touch as I was worried that baby wouldn’t make it to the Hilltop, despite AMC not killing off Judith back in Season 4 in-line with the comics. 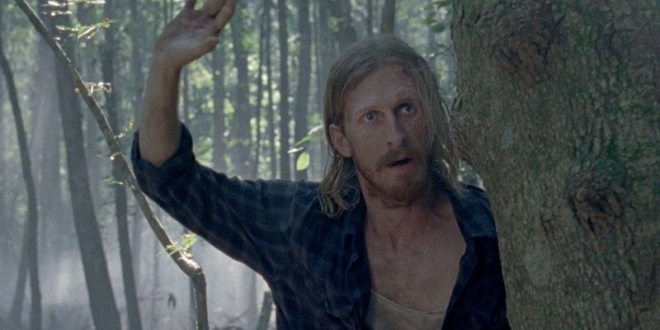 The Alexandrians show up at the Hilltop (great… more mouths to feed) and break the news of Carl’s death, which causes Enid to breakdown and cry.
I am not overly bothered by anything Enid related, so I was distracted by seeing Jerry in the background and all the tents of the Kingdom’s residences, showing us that all of the remaining militia force is now localised together at the Hilltop.
Siddiq, still trying to redeem himself as being somewhat responsible for Carl’s death, says about some past medical experience and offers his help in the infirmary, which is handy as the show killed off the previous person with medical experience only moments before.
Siddiq’s kindness spurs Maggie to realise she is being a bit of a bitch of the Savior prisons, and so she goes and allows them time out of the cell to exercise and work, however, Gregory, while grateful for her decision, is worried about an impending attack by the Saviors and implores that Maggie consider an evacuation, fearing losing the war, however, she is distracted when news that Rick has arrived reaches her. 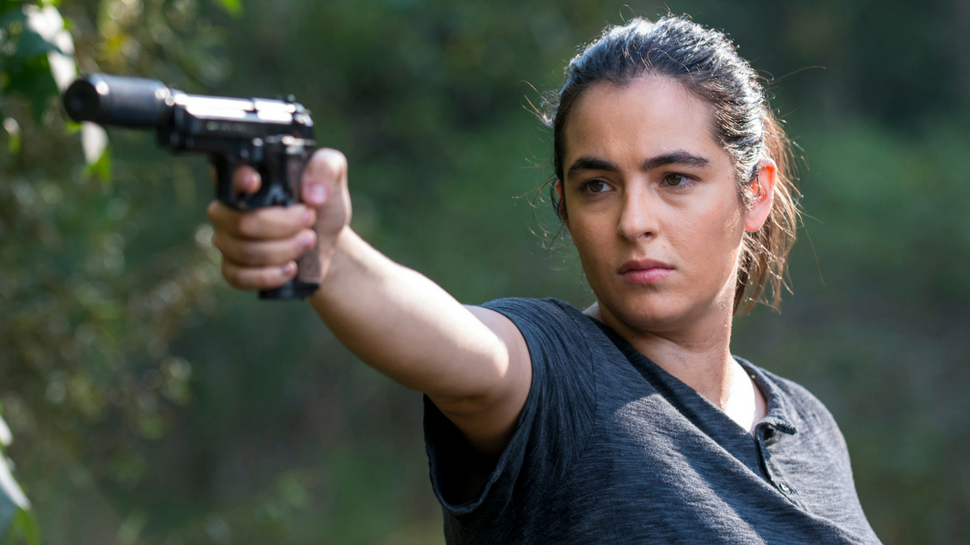 The last story is much shorter and involves Negan getting Eugene set up to running his own personal bullet making factory, complete with woman to feed them and wipe their brows.
Negan suspects that Eugene may have helped in allowing Carlson and Gabriel to escape, and vows to get the truth from them once he has them back, which makes Eugene very nervous around his new master.
Anyway, once Eugene and his merry men are all set up, Gabriel (having recently been captured) is brought in to help arrange the bullet casings. Eugene shits a brick at the sight of him, but thankfully Gabe blames the escape on the recently deceased doctor.

Eugene has to break it to Negan that it will be a while before they have any real supply of bullets available, which causes him to offer some alternative plan of catapulting zombie bits over the Hilltop defences as a type of psychological act, but this gives Negan a grand idea.

The final scene shows Negan with three chained up Walkers, to which he says about how if you get one bite, one scratch, or something of them inside of you, then that is your fate. He then proceeds to batter one with Lucille, covering her in zombie gore, hinting that they must now do this with all their weapons for their next attack.
This is something that happens in the comics and as soon as he said to Eugene that he had an idea, I was very excited at the very prospect of this.
Now in the comics, Nicolas, who is a very different character in the show, is struck by one of these weapons and slowly succumbs to the fever, allowing Rick and the others to figure out their plan. Now I have a suspicion that the same fate is going to befall that random guy who Carol became mates with, and is always knocking about with the Alexandrians. Mark my words! You heard it here first. 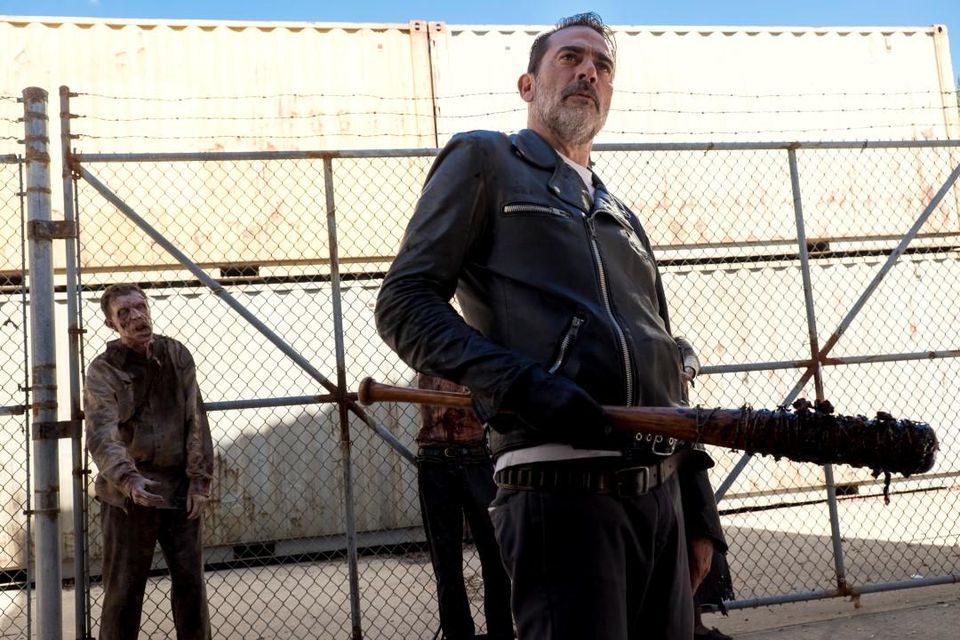 Overall the episode was okay. It was a return to the slower, meandering about ways that the show is famous for, but it did start the build up towards the end of the season battle that is now fast approaching on the horizon.