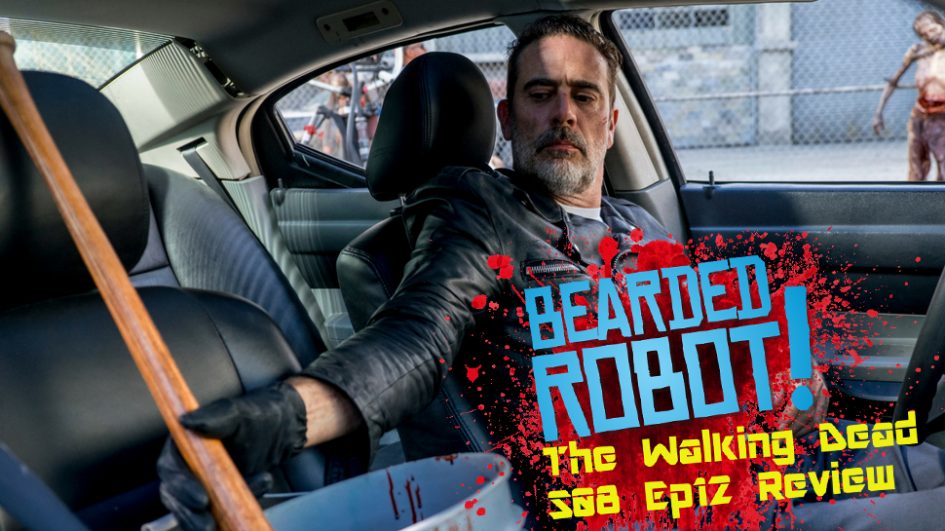 This week’s episode of The Walking Dead, titled; The Key, was a bit of a mixture. On the one hand, by the end of the episode, we felt as if the story HAD taken quite a bit of a leap forward, but at the same time, I can’t help but feel the return of the classic TWD style of character meandering around. The classic example of this is the fact that Negan and Rick; the heads of the two factions at war, fought off once again in single combat, mano-e-mano, and once again, it ended in a draw.
I mean I don’t mind that neither character was killed and the war story continued on, but I couldn’t help but think throughout the entire battle that nothing was going to come of this. It was a good little fight that had some great moments, such as when Rick ignited Lucille and the very setting itself; a run down tenement block flooded with the dead (which I can’t help but seem to think it echoed a similar episode involving the Governor towards the end of Season 3, when he was trapped alone against one of the main good guys, yet that battle also ended in a draw), but ultimately it was just a bit of an action packed moment to keep the zombie fans happy (you know the type of people who complain that “nothing happens” or that there was “not enough zombies”). 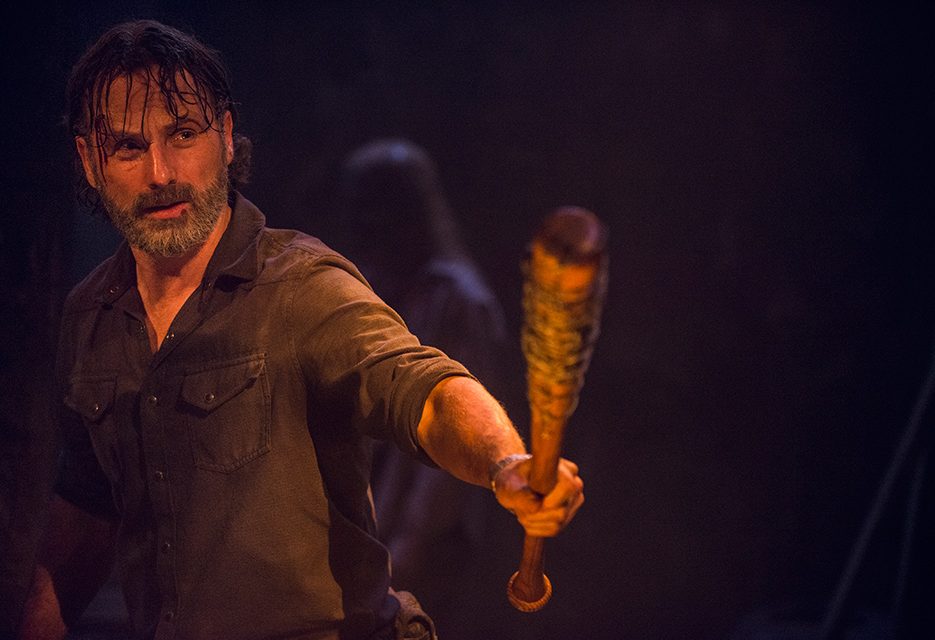 There was a little niggle in the back of my mind that since Simon has now become the head honcho with the Saviors that MAYBE he might become the primary antagonist for the season and that something could happen to Negan, but since the big man found out from Rick that Simon had disregarded his orders and slaughters those filthy Junk Yard people, then lied to Negan’s face about it, that there was more to come with this storyline (and so rightly so), so maybe this little draw battle served as a way for Negan to find this information out, however, by the very end of the episode, we are left wondering what is next for our baseball bat wielding, leather jacket wearing, bad guy, as he awakens from escaping Rick, held at gunpoint in a motor with Jadis (the leader of the Junk Yard people… well former leader) before she knocks him unconscious and the episode ended.

Of course this is just going to be a waste of time to long out the build up to the final confrontation at the end of the season, but it will be interesting to see what shenanigans a tied up Negan and a pissed off Jadis get up to.
I am confident that Negan has enough charm to convince her of the truth that Simon was behind the slaughter of the Junk people, as we still have the great confrontation between Simon and Negan, which is now looming immensely on the horizon, but only time will tell. We probably won’t see what happens with this storyline until two weeks time, knowing TWD, as they like to leave us dangling for a while. 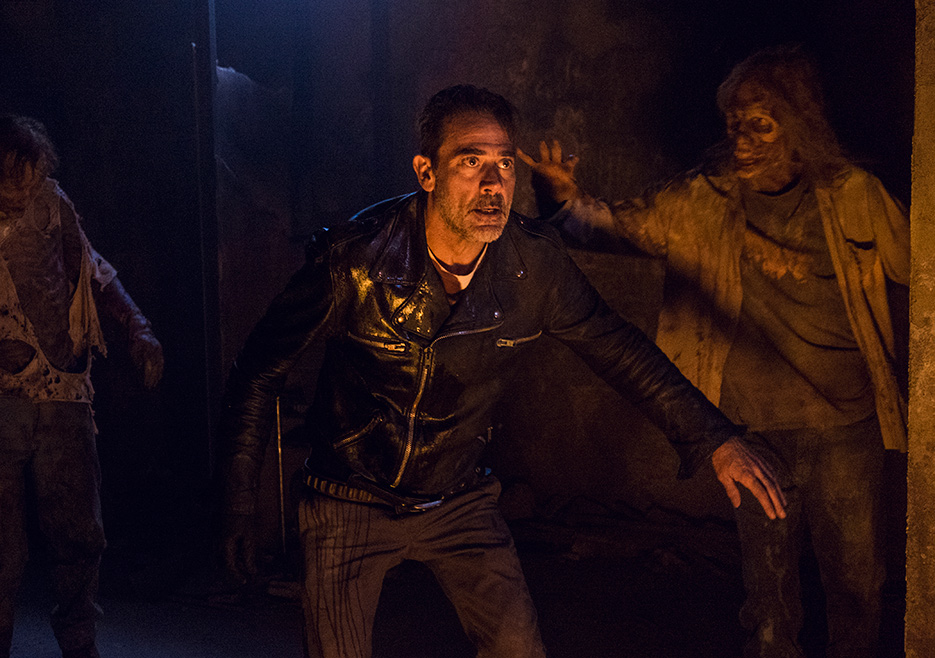 Elsewhere in the world, a random crate and message appeared outside the Hilltop requesting a trade of Food and Music Records for “The Key to the Future”. Maggie suspects it is a trap, but Michonne convinces her, Enid and Rosita, who were all suggesting that it was the Saviors, to go to the meeting point left in the letter.
It is this conversation that is the greatest example of what I personally hate about the writing of the show. Each of them spoke in the exact same overly dramatic and breathy voice. It is just very annoying and doesn’t feel real. They have to do this in every episode, and usually it is only two people having this breathy dramatic conversation about survival, or some shit, but annoyingly it was 4 character, most of whom I cannot stand. Enid especially. Why the fuck is she getting involved in anything?! She is like 14. Who even listen to her?

Anyway, so the group of gals go on the mission and discover a van with two guards outside and a suited woman named Georgie (played by Jayne Atkinson from House of Cards), who seems genuine, but Maggie and the others do not trust them and holds them prisoner.
Ugh… how frustrating. I know that is what most people would be like in this situation, given everything that they have been through, but it is terrible to watch and I find it really hard to get behind the protagonist of this show and be on their side.
You can see that Georgie is not mucking about or have any motive, but we must go through the time wasting dance where Maggie has to bring them back to the Hilltop, before eventually letting them go.
At which point Georgie offers them some of their food supply from the van, which Maggie was just going to take anyway, against Michonne suggest to not do it, and naturally Enid tries to stand up against Michonne saying that was what Carl died for, and we are just left thinking; what the hell do you know! Go away! Which is pretty much what Michonne says to her. 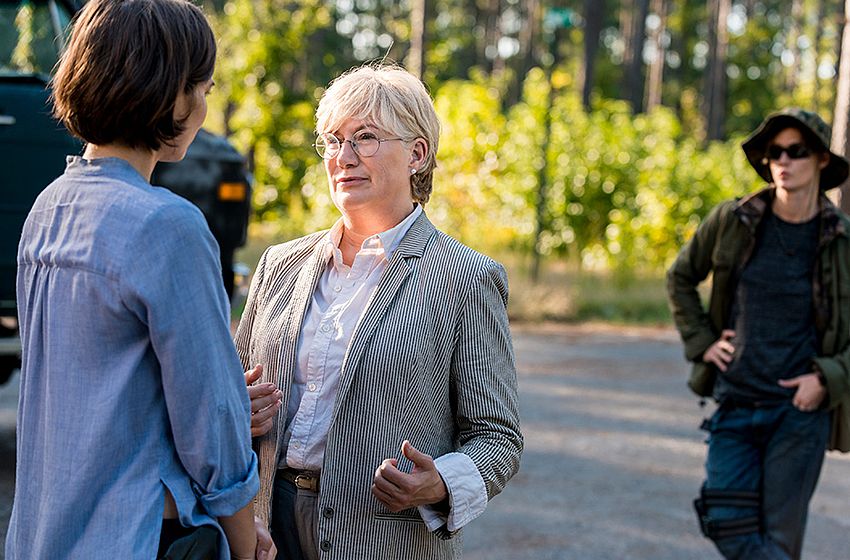 Georgie also gives them “The Key” which is a folder containing documents on how to construct mills, wind turbines, and all other useful survival techniques from mankind’s past.
It is interesting to think that the Hilltop will be around for a while, long enough to construct and make use of the documents in the “key”, which gives me the impression that the show will follow the same storylines as the comics following the end of the war against the Saviors.

Georgie then leaves but not before hinting that they will see them again in the future. Now I reckon that this will be the end of her for this season, but if it serves as laying the foundations for a storyline later down the line, then I am all for this (so long as it does eventually come back).
In the comics, the characters have just met up with a fucking enormous community called The Commonwealth, who are around 500,000 strong. While I do think the show will be pulled before it got to this point (as this happens about 2 years after the war with the Saviors), perhaps they will bring this story forward to reap the interesting plots that have developed, in hopes to increase TWD’s life.

So this was the main two focal points of this episode. There were some other points to just quickly add in, but I have accidentally deleted a large portion of this review, and due to the lack of people reading, I am confident enough that I can just give this a brief run through and not many people would notice.

Dwight remains undetected as the traitor of the Saviors, even to the point that Simon managed to convince him to join his rebellion against Negan, which he has been secretly laying the ground work for, and when they find Negan’s car flipped over, covered in a lot of blood from the gore he was keeping Lucille in (not the best idea when you are driving), Dwight uses his last smoke (which he went on about in a previous season) to ignite the petrol and burn the car as a symbol to show he is on Dwight’s side, at least as far as he is concerned. 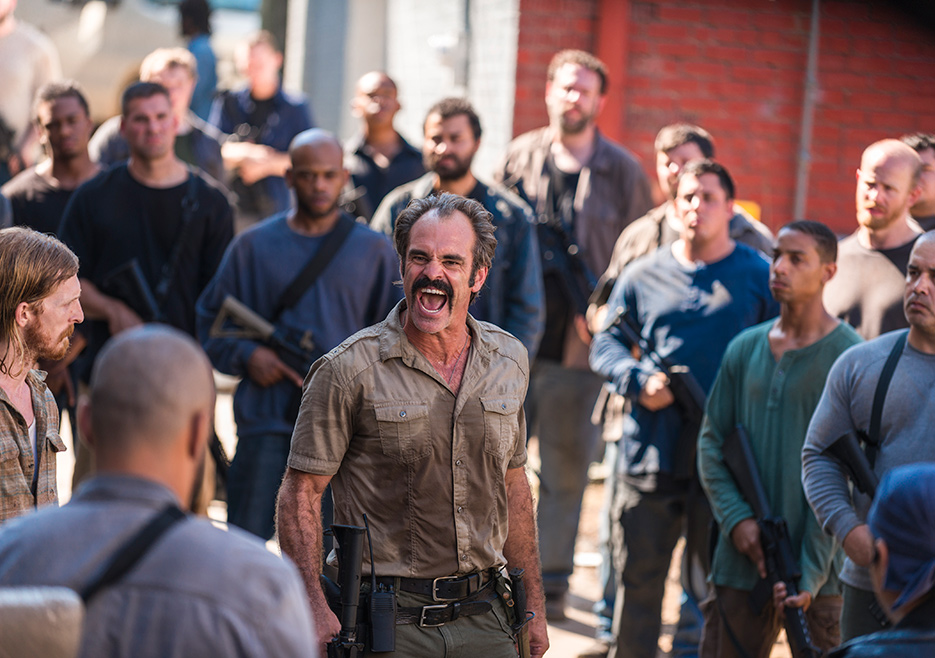 Going back to Negan’s car… how come Negan was not covered in zombie blood when the car crashed? He was lying in the foot-well and there was gore all around, yet he was relatively unscratched.
Also, Lucille… she is now a gore covered, barbedwire wrapped, FLAMING, baseball bat. That weapon has a lot going on.
+10 Poison damage, +5 Fire Damage, and +3 Bleed. That shit is modded to the highest!

So with Negan out of the way, supposedly dead, but he will make a return to reclaim his people, Simon takes the reigns and can now finally unleash his plan to wipe out the Hilltop, and with no Negan and his decision to just make his enemies understand, Simon is now free to use the Saviors however he sees fit.

Overall, this week’s episode pushed the story a little bit forward, if it was just another battle between Rick and Negan which ended in another draw, yet by the end of the episode the characters are in quite intriguing places and leave us curious as to what might occur in the next episode.
While other storylines still feature the same sort of Walking Dead overly dramatic and breathy conversations, an interesting sub-plot gives us a hint at the show after the end of this war.
But episode was good and gave us a lot to enjoy and a lot to take away, so I can’t fault it really. 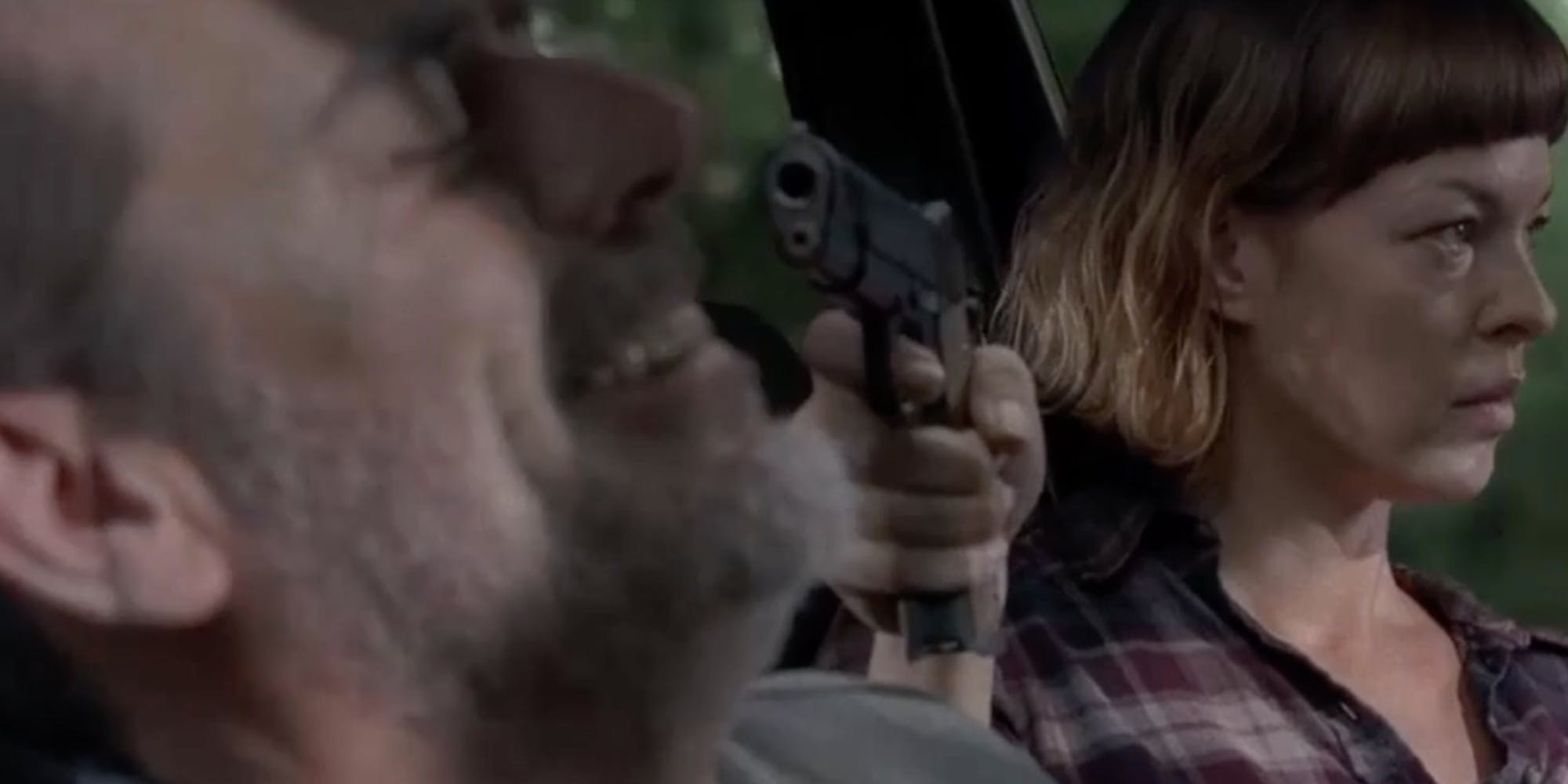 The season is starting to come to a close now, and with only 4 episodes remaining, we are left wondering how can they drag this out now?
I mean Simon and the Saviors are going to the Hilltop to slaughter them, everyone is at the Hilltop… bar Negan, but I am sure they will find a way to long it out.