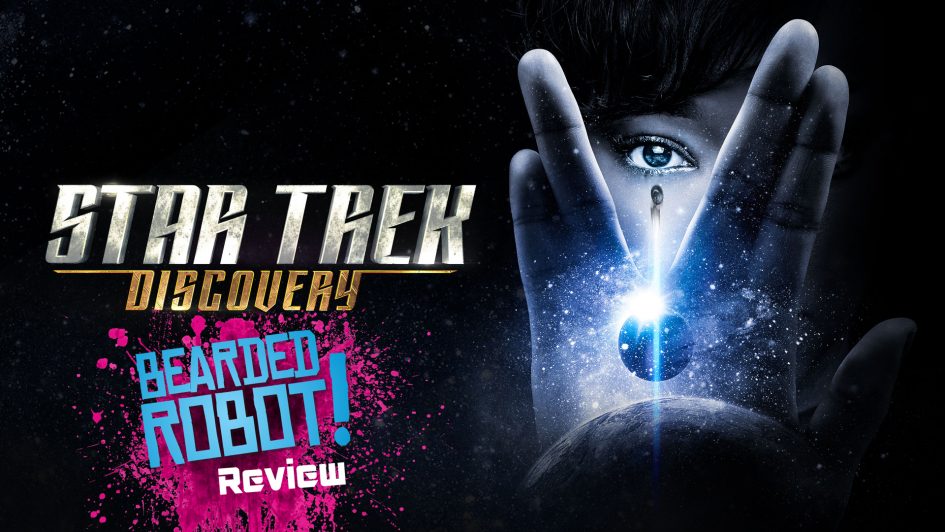 In September 2017, I reviewed the first two episodes of Star Trek Discovery (which can be seen here: http://beardedrobot.co.uk/uncategorised/star-trek-discovery-episodes-1-2-review/) and since these two episodes are a type of prologue to the rest of the story, I do not really feel the need to cover them here other than mentioning that the story of these focus around Michael Burnham (Sonequa Martin-Green from The Walking Dead), serving on-board the USS Shenzhou, when it first makes contact with the Klingon Empire after nearly 100 years, and mutinied against the captain, which resulted in her being sentenced to life in prison.

The rest of the season goes from there as there first two episodes are almost a self contained story that helps lay the foundation that the season is built upon. A few key moments are referenced later on, as well as a few characters make a return to help make these episodes more relevant as the season progresses, but really these can be enjoyed as their own individual entity. 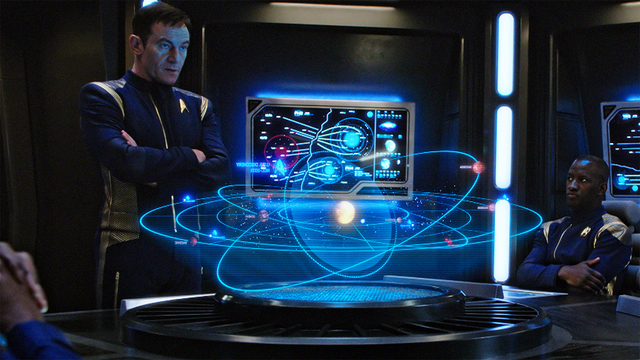 The real story begins with Captain Lorca (played by Jason Isaacs), who is the commander of the USS Discovery; a secret federation black project conducting various classified scientific experiments on-board, as he recruits Michael and gives her freedom if she agrees to be assigned to the crew.
During their time together, the team uncover a new way of travelling with an organic life-form, dealing with the fast approaching Klingon war, and uncovering what Captain Lorca, who is a relatively shady individual who likes to use unauthorised federation methods, is really up to.

Unlike the older series of Star Trek, where you could pick it up and watch it from any point and have a rough idea what is going on, other than the odd episodes here and there that were part 2 or something similar, as each episode is different. Discovery is, for the most part, one continuous story. Gone have the days where each episode of a TV show is its own self contained storyline, like CSI and House, nowadays people want one long 10-16 episode season telling one long story. Thankfully Discovery is just that, other than one of two episodes which feel a little self contained.
There are two episodes which link together, with one of them being directly important to the main story, which make an origin story for one of the classic characters of various seasons of previous Star Treks, and there are a few other classic characters and references that pop up for the old school fans, but Discovery is clearly a kind of reboot to draw a new audience in with.

With that in mind, Discovery is not like any Star Trek season I have seen before, which is good and bad at the same time. I have a few die-hard Trekkies and I know that when they see this show, they will not like it due to the dramatic changes. I see it as more of a hybrid between the original show and the J. J. Abrams movies, which again were hit and miss among Star Trek fans, but did fantastically with new audiences.
Why it is good for new comers to the show to just enjoy it for what it is, old fans of the previous shows have felt a little confused as to what is going on, but I do feel that if you wait until the end of the season then most of this is explained.

Character wise, as with all Star Trek series, there are some interesting characters, such as Doug Jones’ Saru; who is a Kelpiens, a new alien species which were hunted as prey on their home planet and thus evolved the ability to sense the coming of death.
Shazad Latif as Ash Tyler who is a human previously held captive on board a Klingon ship and tortured for months, suffering from terrible PTSD.
And of course both Sonequa Martin-Green and Jason Isaacs do their roles brilliantly, which is strange as I never like Sonqeua on The Walking Dead, I found her annoying, and in this she was raised by Vulcans, who have no emotions, making her even less emotionless, but thankfully she is written well enough that she is actually quite engaging and likeable. 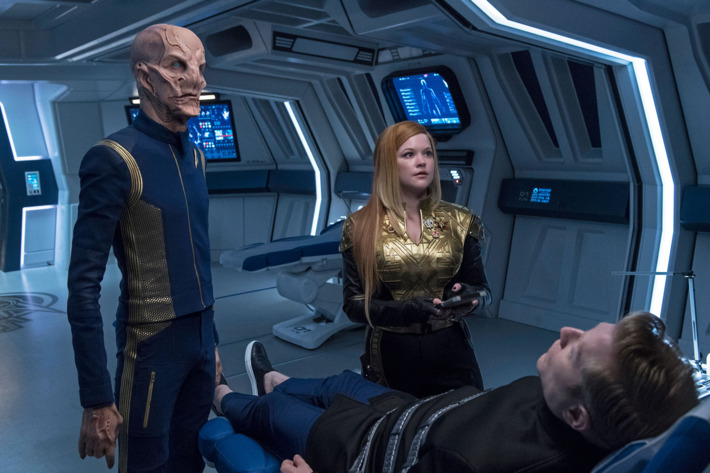 Other characters on the show are quite annoying. The character of Tilly, who is nothing more than a supposed comedic character designed to provide cheap American style comedy, can fucking do one. She is incredibly annoying and is a cliché character that has been thrown into these type of things in hopes that audiences can relate to them (much like Tara in The Walking Dead – sorry I have TWD on the mind now).
Another one is Anthony Rapp as Paul Stamets (who you might know as the guy who brought Kevin Spacey’s… shadiness, to night) who plays the Discovery’s chief engineer. I found his character changed dramatically over the course of the show. At first he was just an openly gay jobs worth, but then he became an openly gay visionary, and the change was so sudden that it may as well have been a different character all together. The reason I have pointed out that he was openly gay was because they wanted to make a massive deal out of having the character’s sexuality a key focal point of him, which, in my opinion, does not matter. If a character is gay then he is gay, don’t focus the sexuality around the character and define him that way, other wise people will just go “some openly gay jobs worth”, rather than describing him as he truly is “a jobs worth”… at least until something occurs and he becomes more focused and the character improves slightly, but there is something strange about Anthony Rapp as a person that I cannot put my finger on. Maybe it is because he has big eyes and looks like he hasn’t got any eyebrows.
His character is openly gay is another man who looks like the writers wanted to get the most homosexual character they could find, down to the voice and the little beard that EA put on Mass Effect characters to indicate that they are also gay.
It all just seems a bit pandering in my opinion. The audience has no problem with them being gay, but I feel too much attention is focused on this, when they could develop the characters in other ways.
Right, that’s enough of that as I don’t want to get accused of anything. 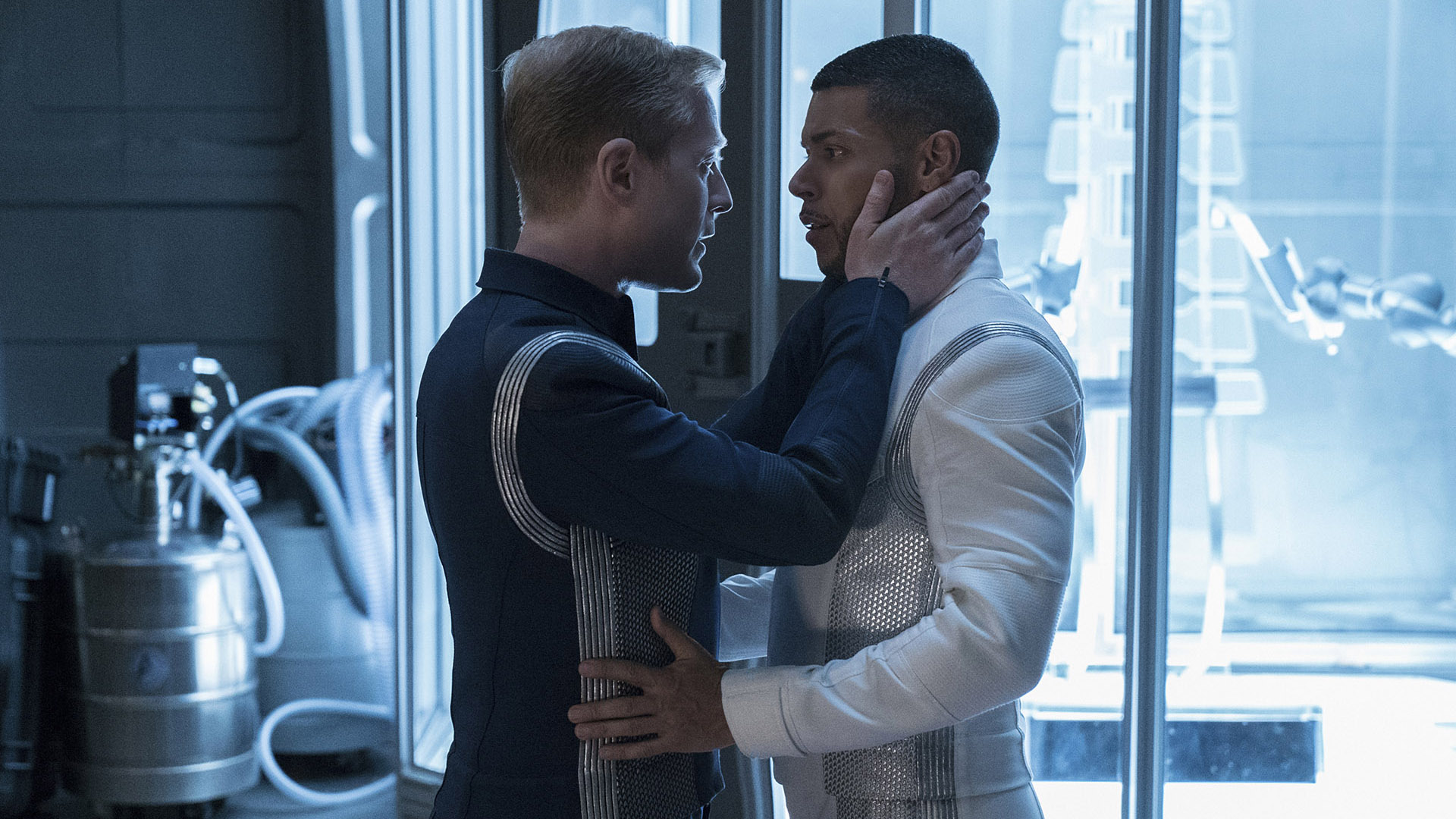 There are some great twists in this season of Discovery. One of which becomes blatantly obvious at one point, but the writers continued to drag it out for two more episodes before making the “big” reveal, and by then I was pretty sick of that plot. It is a fantastic idea, but then by going back on themselves later on in the season, they kind of undermine the significant importance that they tried to make earlier in the show.
I can’t explain it any more than that without spoiling it, but I will say that it involves Voq.

Another twist near the end of the season blew me away and I actually thought that the series was fantastic from that point, however, they couldn’t hold onto it and immediately rectified this situation in the next episode, which was a crying shame.
In fact after this episode the season went a little downhill for me. After the mid season break, the Discovery becomes trapped in a situation that spans the rest of the season, except for the final two episodes, which jumps back to the Klingon war and makes us almost forget all the great stuff that came before.
I felt a little like the show resolved one situation and almost immediately threw them into another one before we have a time to catch our breath. The twist involving the character was so important to the show and should have been the main focus of the season, but by having this cheap little story thrown on the end, I couldn’t help but feel that it tried to spread itself out too much by covering so many different plots, not necessarily at once, but one after another.

Having said that, the finale leaves it open well for the next season, which has been confirmed, and there are some great moments in it that can almost make you appreciate the entire season as a whole, if it did not really feel that it was actually four stories chopped up and stuck together (the prologue, the first half of the season, the second half – which was really good, and then the last two episodes as a kind of epilogue and teaser for what is to come).
On the one hand, I do like it when shows tease things and get us geared up for the next season, but on the other, I do like seasons to be their own self contained story lines that (mostly) get resolved, rather than dragging it out to the next. 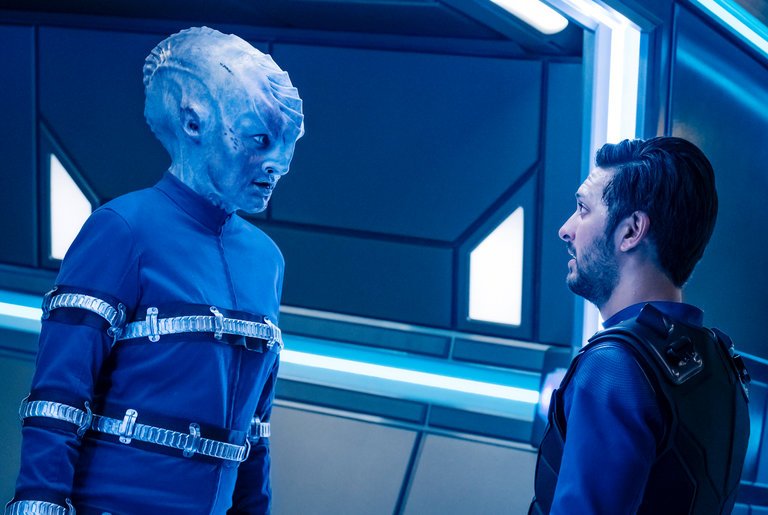 Overall, Star Trek: Discovery was a bit hit and miss at times. Some episodes really did grip me, but others I felt bored and uninterested no matter how much Star Wars-esc action they threw in.
While some older fans might not like it, unless they are the type to like it purely because it is canon, new viewers will enjoy it so much more. It is written with that in mind, but it does have some nice little nods for the original Trekkies, if they manage to spot them.
While a few characters are a little dull, the main ones do a great job of shining. Renegade characters like Lorca and Tyler, are a brilliant mixture to the by-the-book types that the franchise is littered with.
The story itself is another factor of the show that is hit and miss. For every amazing plot twist or storyline that appears, I felt that it was ultimately ruined somehow or undermined in a later episode.
The second half of the season was a lot stronger than the first, but the foundations were laid during these, which allowed the second half to grow, so I guess it does work out in the end.

Next time I would prefer if they focused on having a single main storyline that arch over the entire season, rather than four separate ones that link shoddily together, but really I do feel that Discovery is worth your time.
It is not one of the best things on TV at the moment, or even ever, but with a little work it could be a nice runner up.