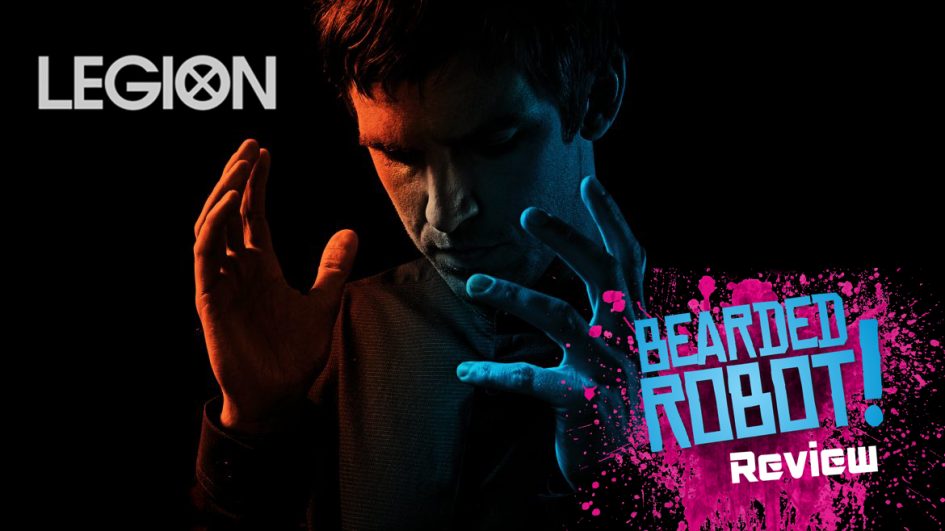 After the success of the first season of Fox and Marvel’s television show; Legion, it is inevitable that a second would be made. It was well received by nearly everyone who watched it.
For me, it was a little bit of a difficult watch at times, but due to the fact it was only 8 episodes, I felt that it was nicely spread out and filled them with enough content to keep me engaged, even though, at times, because of the style and such themes as insanity and confusion, I couldn’t help that it was being odd for the sake of being odd.

Well season 2 takes everything mentioned above and goes full out. It is odd for the sake of being odd… but ten fold! It is strange and confusing in places, like before, only this time it tries to push it as far as it can.
Like in the first season, when characters might break out in song or dance numbers, random snippets that don’t seem to make much sense, or scenes that appear out of place with the rest of the series still feature predominately throughout the course of season 2. 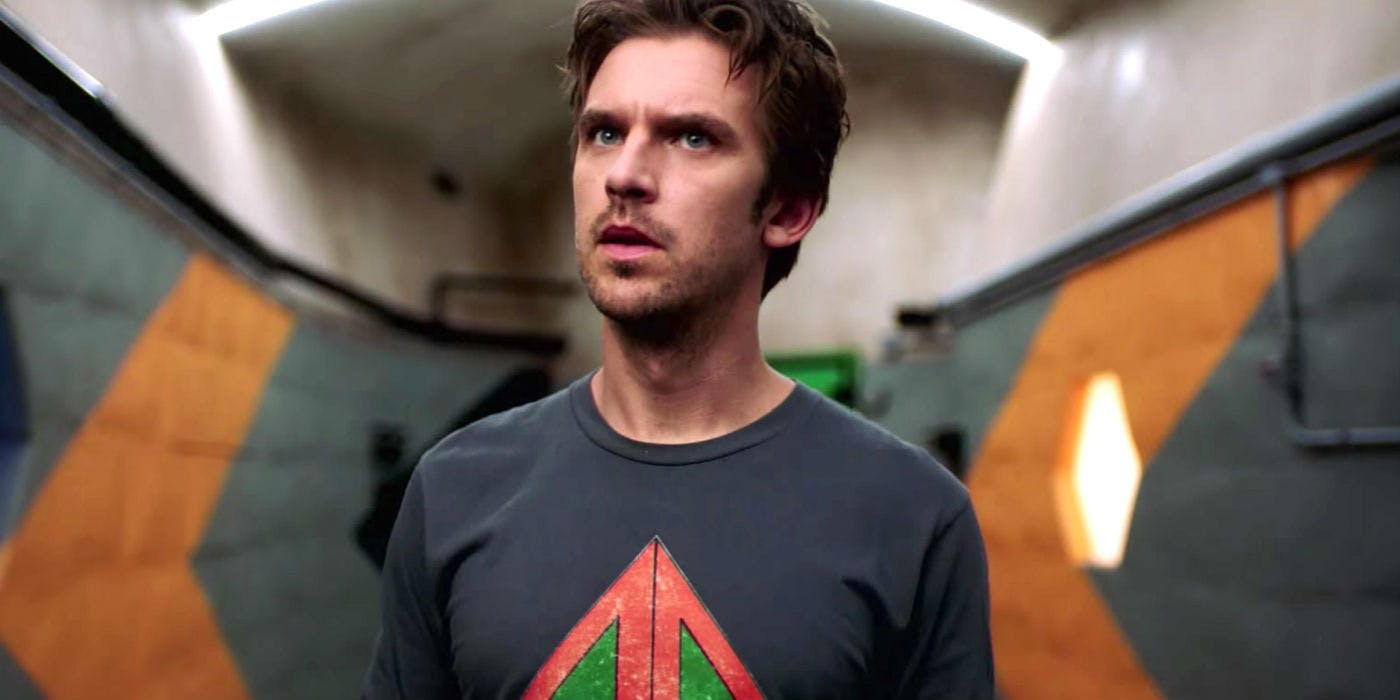 So for those of you who do not know; Legion is a Fox and Marvel television series that does not take place in anything remotely related to the Marvel Cinematic Universe (such as Agents of SHIELD, or Daredevil), instead Legion is an X-Men story that does not really link to the X-Men films.
The story focuses around David Haller, who is the bastard son of Professor Charles Xavier, so he is a powerful mutant, although nicely the term mutant is barely used in the show, if at all (I am not 100% that it is not, but I am pretty sure it isn’t).
As a child, David is haunted by inner voices and demons, personified as terrifying entities and is believed to be a danger to himself and others after being diagnosed with schizophrenia and has been in various psychiatric hospitals since.
During his time between hospitals, he becomes close friends with Lenny, who is a history of drug abuse and sends David down this path which he uses as a way to escape the horrifying evil in his head.
During the course of the first season, David escapes and is hunted by the government agency; Division 3, but is saved by a group of mutants, including Melanie (their leader), Sydney (who becomes a love interest for David, however she can trade places with anyone she touches) and, eventually David travels to an astral plane to rescue Melanie’s husband; Oliver (played by Jemaine Clement).

David learns that his mind is actually infected by the parasitic mutant called Amahl Farouk, known as the Shadow King, who has been feeding off his fear and was a great enemy to his father (Professor X), who defeated him, but it turned out he went into the mind of his son; David.
During the course of the season, David is able to force the villain from his mind, but by the end of season 1, Farouk enters the mind of Oliver and escapes. 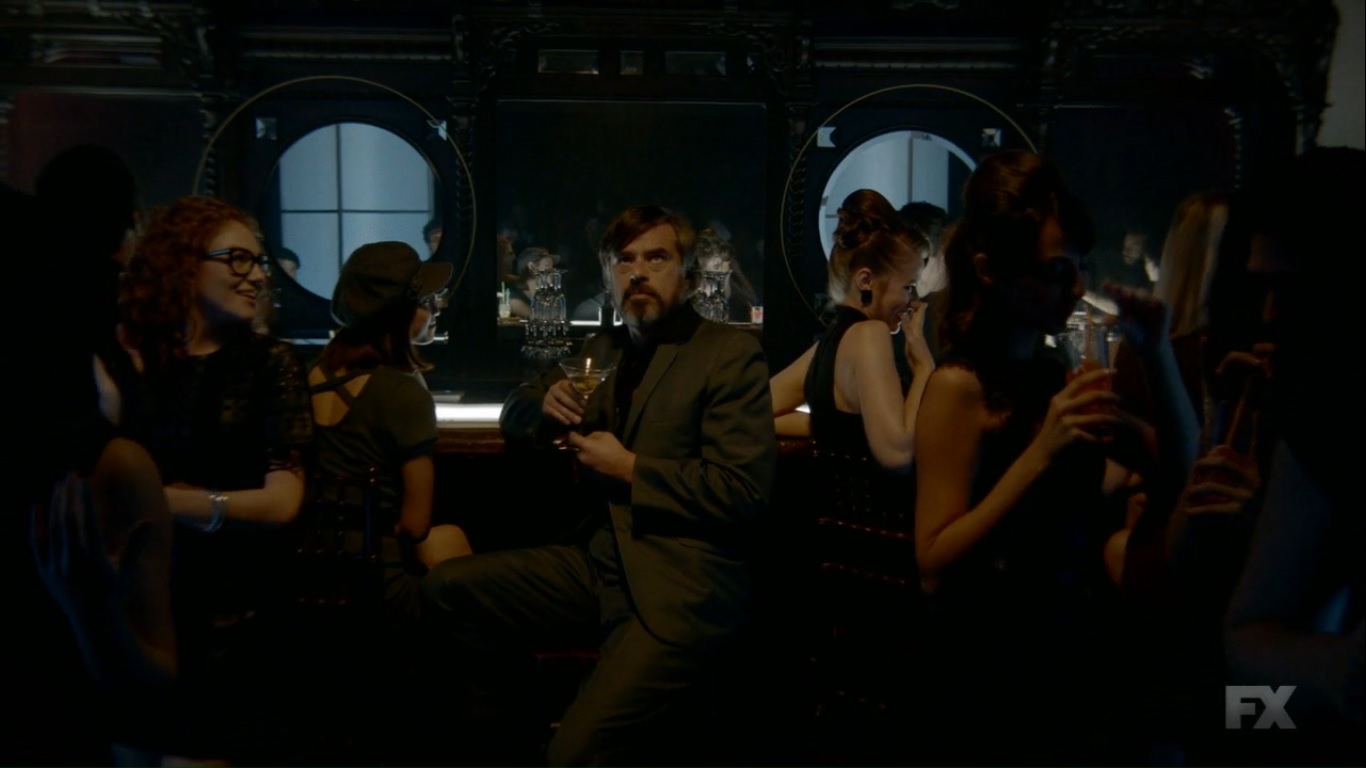 This is where season 2 picks up. Here Oliver/Farouk are searching for Farouk’s physical body so he can return his mind to it. There, he will be the most powerful entity of all time.
Meanwhile David has joined Division 3 and works alongside them and their mysterious leader to stop Farouk from achieving his goal.

This is basically the entirety of season 2, and while it was enjoyable for the most part, I did find that the story itself could have easily been told in half the amount of episodes. The second season is 11 episodes (over season 1’s 8) and its length really does show. We have about 3 or 4 episodes that are just little side stories or character history episodes (which are fine for building character’s at times) but when the main plot of the show feels so spread, it can get a bit annoying.
I felt as if Farouk learned where his body was in about episode 6, then never reached it until the finale of the season. In the meantime we have episodes such as David entering the mind of someone to rescue them from their catatonic state, or an episode about Sydney’s past (which was still an enjoyable episode, but when I felt myself just wanting the main plot to get the fuck moving!). 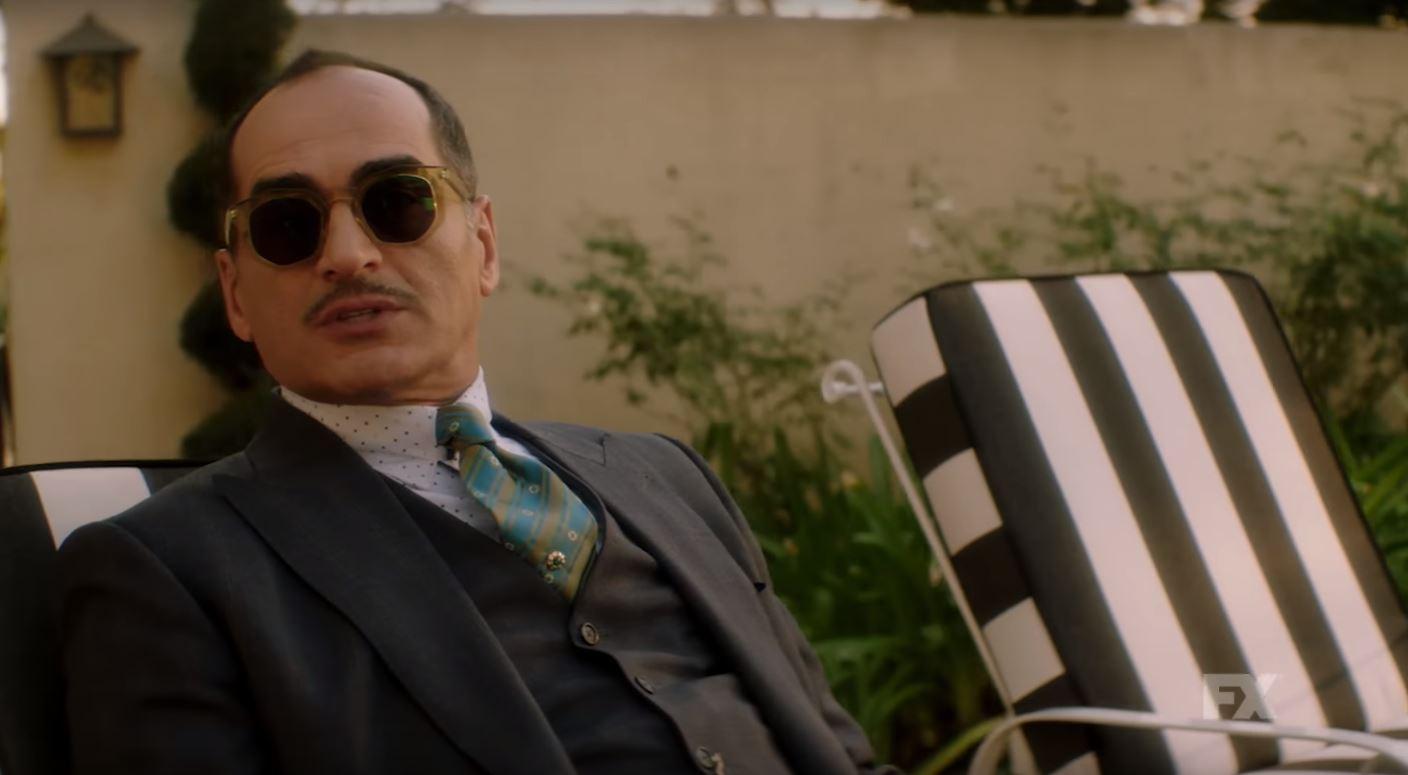 This is a difficult issue for me, as I always go on about things feeling too rushed, especially if you have read any of my recent reviews, but in the second season of Legion, I felt that it was just trying to drag out a relatively short story as long as it possibly could.
For the most part, I enjoyed it. It was an insane, and at some times silly, journey, but it just took too long to get moving. Then when it got to its big climax in the finale, the episode opened with a really strong introduction which seemed to bring together all of the major elements that it had been building up over the course of the season (some of which were frustratingly annoying as you have no idea how it is even going to fit in), all to have this big showdown between Farouk and David, which then gets unexpectedly shortened down and ends abruptly, only to have the final episode be about something else entirely.
So we have spent this whole season building up to this one moment, then that moment lasts about 3 minutes, and then focus on a plot point which has only been loosely touched on in the previous couple of episodes.
I don’t know, I guess I just felt disappointed that the show decided to go down this route, all of which feels like it was created to make an interesting starting point for season 3, which it does do. I am quite eager to see where this show goes for how it wrapped up season 2, but when you focus your plot on just building up for the next season, your current season becomes almost nothing but filler for “Next time”. 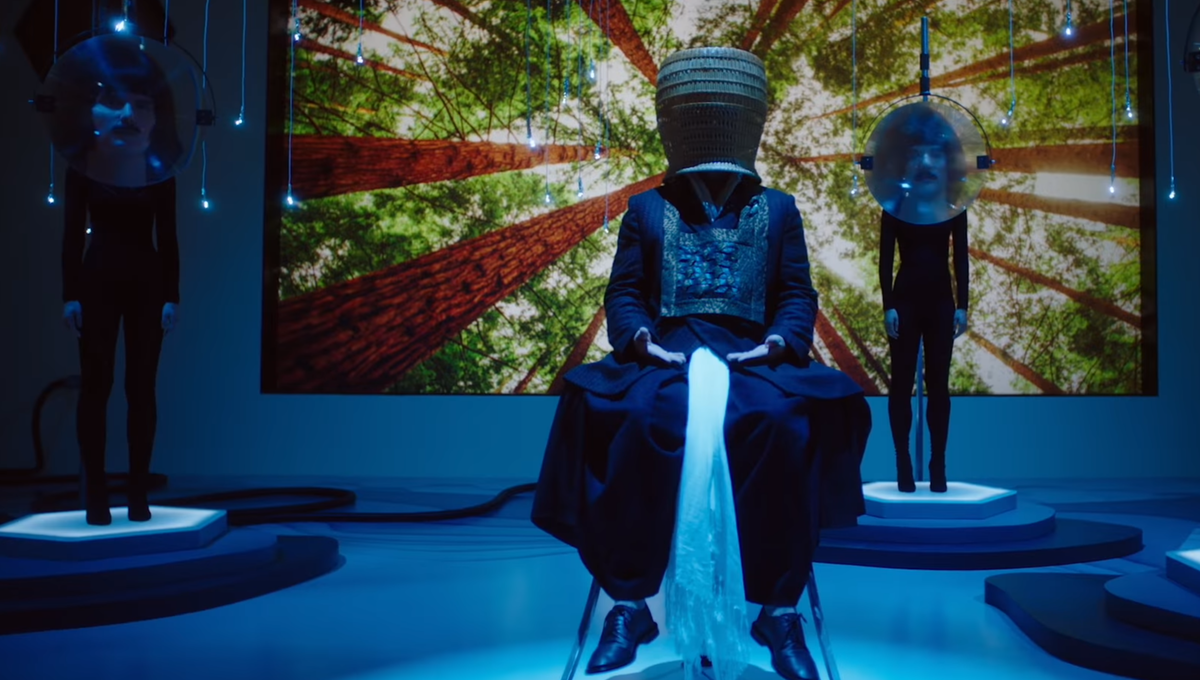 With regards to the show being odd or random, sometimes for the sake of randomness, season 2 is littered with this throughout, some of which works quite well at setting the tone of the series, and others just really felt distracting and odd because they could just do it.
For example, the mysterious leader of Division 3 is a Japanese man with a wicker basket on his head, surrounded by various women robots (who sound like GLADOS from Portal) and have moustaches… for some reason.
There are various other oddities like the dance off between David and the possessed Oliver, and anything involving Lenny, who I felt played an important role in the first season, but the second they had no idea what to do with, so they threw her in anyway that they can.
This is incredibly true when there is a major twist about halfway through the season, which I actually really enjoyed, but it was just an excuse to keep her in the show. There were times when I did feel that Lenny was a little too “insane” to almost a cliché level, whereby she has no actual moments of being a realistic and believable character.

It seemed that for every decent and interesting character, there was another who was dull or forgettable that clogged up too much of the screen. Cary Loudermilk was an interesting character, but his sibling who coexists in his body; Kerry, was not. In fact I found her a revamp of River from Firefly, or at least that type of stereotypical badass yet socially awkwardness that you can only get away with if it is a female character, but now it has become a bit overused, therefore I found myself eye-rolling at most of what she said.
Other characters like Sydney (whose character changed dramatically over the course of the season) and Ptonomy, were examples of dull and uninteresting characters, despite the fact that they are semi-important to the show, while Oliver and Farouk (who both serves as this season’s primary antagonists) were really strong characters that I wanted to see more of, Farouk especially (as I think I might have a thing about bad guys). 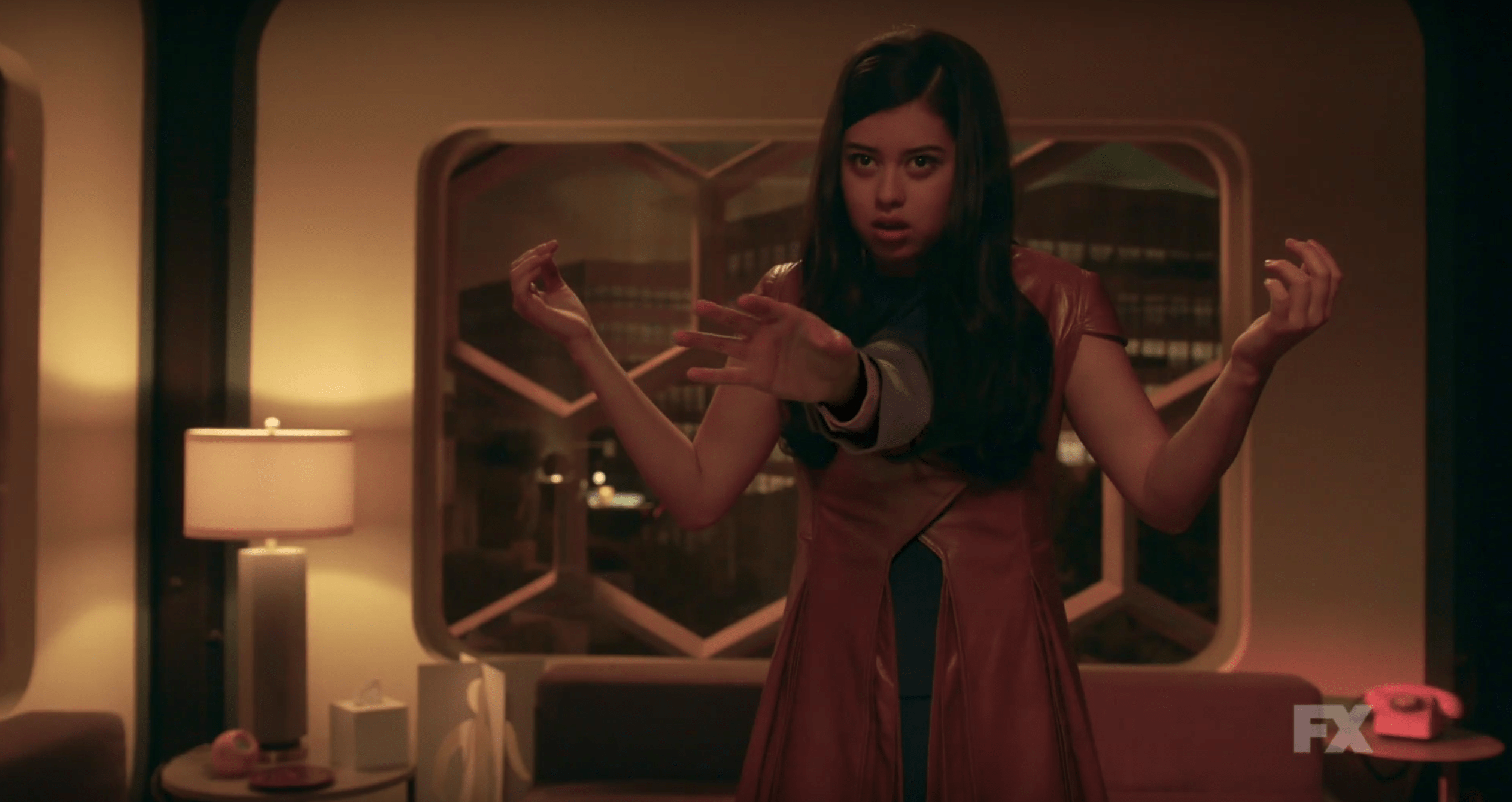 Overall, for everything that is wrong with Legion’s second season, it does do a lot of things right and hits the mark every now and again throughout the course of its long and drawn out story. I found myself enjoying more than I was looking at my phone of doing something else whilst the show was on, but that is not really a good thing if you think about it.
There were some really great moments, such as the showdown between the main character and his ache nemesis, if it was not just cut a little short to tell a completely different story right at the end, just so they can make a good starting point for the second season.
If you liked the first season of Legion, and enjoyed the strange and odd story that it was telling, then you will like what you see here in the second season, it is just that a lot of things could have been cut to create a more tighter and well-rounded experience that makes use of the major factors that make the show great, such as more Farouk, more Oliver, less side stories and a more fitting ending to the season.