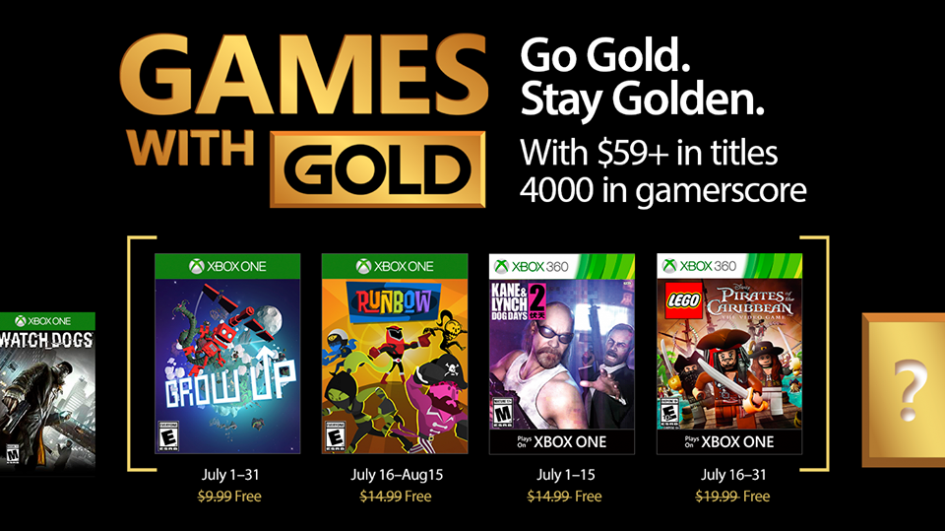 Microsoft have announced their new Xbox Games with Gold for July 2017.
These are four free games that are released over the month. One Xbox One and Xbox 360 game (also backwards compatible with Xbox One) will be released on the 1st of the month, and then another two will replace them on the 16th (just in case you didn’t already know).

This month’s games are:

Grow Up – Available July 1-30 on Xbox One
Living the life of a B.U.D. (Botanical Utility Droid) can be tough. Especially when your spaceship breaks into pieces and scatters across a planet filled with amazing plants and wondrous structures! As B.U.D., along with your friend P.O.D., you’ll traverse this open world and recover parts of your ship. Fly, climb, bounce, roll and complete challenges along the way in this wibbly wobbly fun adventure.

Runbow – Available July 16-Aug 15 on Xbox One
A fast-paced party action game with a never before seen color mechanic. Up to nine players can race against each other locally or online as platforms and obstacles appear and disappear when the colored background changes. Go head-to-head in one of Runbow’s modes, including Arena, King of the Hill, ColourMaster, and The Bowhemoth.

Kane & Lynch 2 – Available July 1-15 on Xbox 360 & Xbox One
Play as two violent and disturbing criminals in the action shooter Kane & Lynch 2. Lynch, the psychopath, has his sanity on the edge at all times and Kane, the ex-mercenary, is disillusioned and desperate. Play as both in an epic single-player story driven campaign, or team up with a friend over Xbox Live.

Check them out and enjoy