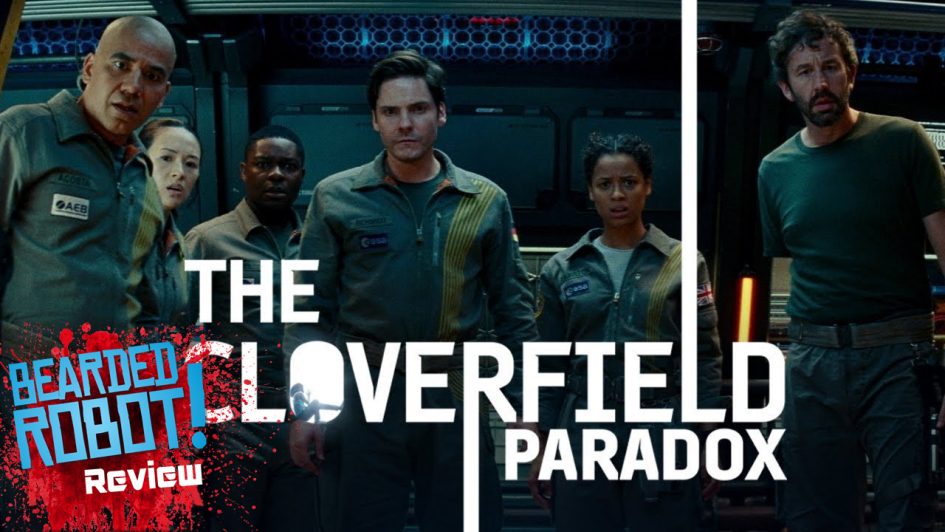 *Spoilers for the previous 2 Cloverfield movies only*

Earlier in the week (or at the end of last), the USA held the Super Bowl and during the ad breaks we were treated to a tremendous amount of interesting trailers. From Jurassic World 2, a new Mission Impossible, and the long awaited teaser for the new Star Wars film: Solo, to suddenly springing on us that there was a new Cloverfield movie coming out… and that it was out straight after the Super Bowl on Netflix. Wait… what?!
Yes! A brand new film, set within the Cloverese (apparently that’s a thing) has emerged completely out of the blue and its out now.
This kind of random release made me suspicious, but having enjoyed the previous two Cloverfield movies, but at the same time able to see how flawed they really are, I had confidence in this one. Titled; The Cloverfield Paradox, which is supposed to link all the movies together, answer a few outstanding questions, destroy some amazing online theories, and serve as its own individual movie.
And while it does do all of these things (mainly explaining what is happening in the Cloverese and laying waste to a number of great possible theories), the film has been met with some dire reviews.

Many websites I follow have claim that The Cloverfield Paradox is a bit pile of rubbish, and if you read the comments sections, there is a lot, A LOT, of hate for it. And since having watched it, I can understand where some of this hate is coming from, but in my opinion the movie was not as terrible as everyone has made out.
Maybe it is me as I am a bit of a Sci-Fi horror guy, and anything Science Fiction to be fair, but it does not grant it a free pass. It still needs to have some good in it, and much like Darth Vader himself, I think I can sense the good in this film. 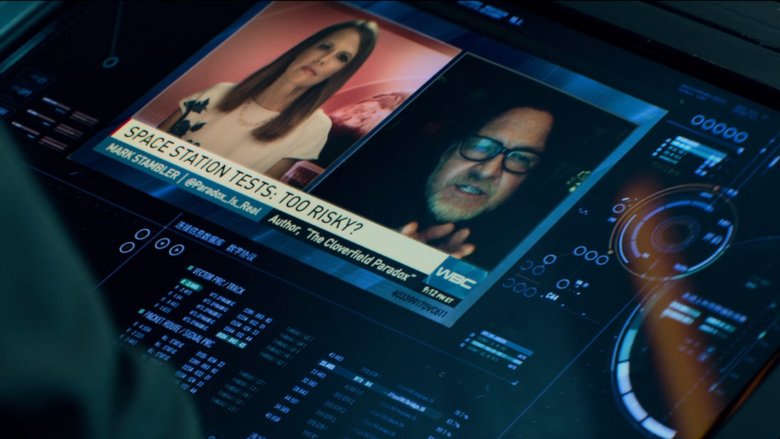 The Cloverfield Paradox’s biggest problem is that it doesn’t know exactly what it wanted to be. The original Cloverfield movie was a unique twist on a Godzilla-esc film viewed entirely through the camera of a group of kids who would not put the fucking camera down for 2 fucking minutes! And if they did, maybe some of them might have still have been alive. It was different (at the time. Shortly after this there was a massive influx in shaky camera movies), and you spend the entire film wanting to see a clear image of the creature. When you finally do, it lost a little of its steam and the movie became a little more blatant than I would have liked (this is a theme that follows over to The Cloverfield Paradox, which I will address in a moment).
Its sequel (if you can call it that) was a film about two people hiding with John Goodman (who by the way was brilliant in this film) in his Bomb shelter as “something” is occurring outside, possibly some alien attack, but we are not sure. We are lead to believe that it is the monster from the first Cloverfield film. It was suspenseful and well done for just being set inside a small bomb shelter, but the film ultimately takes a nose dive once they leave the sanctuary (?) of it and the main character manages to escape (the question mark is because it really was not a sanctuary at all). Here the movie turns crap and is incredibly ruined in the last ten minutes by making the lead character suddenly fight aliens, bring down an alien ship, and ventures off to join a resistance movement. It was a little wank, but up to that point, 10 Cloverfield Lane was really enjoyable.

It is worth noting that, like The Cloverfield Paradox, 10 Cloverfield Lane was not original written as a Cloverfield film (fuck sake! Stop saying Cloverfield!). 10 CF Lane was originally called The Cellar, and had no link to the previous film, so it is clear that the similar ideas of Earth being taken over by or destroyed by some unknown entity, was either shoe-horned in at the end (as the ending where everything was fine and John Goodman was nuts is so much better), or maybe it was always there the whole time, but it could have been a little less… blatant (there’s that word again, and so you will have to forgive me for being so “blatant” with it, but that is the theme of the movies and that is what I am going to do with this review).

As for The Cloverfield Paradox, it was originally called God Particle, and while the Cloverfield stuff must have been added in during production in an attempt to link all the movies together with one overly simplistic answer, it has clearly been rewritten too many times to account for this that it has managed to lose its own individuality. 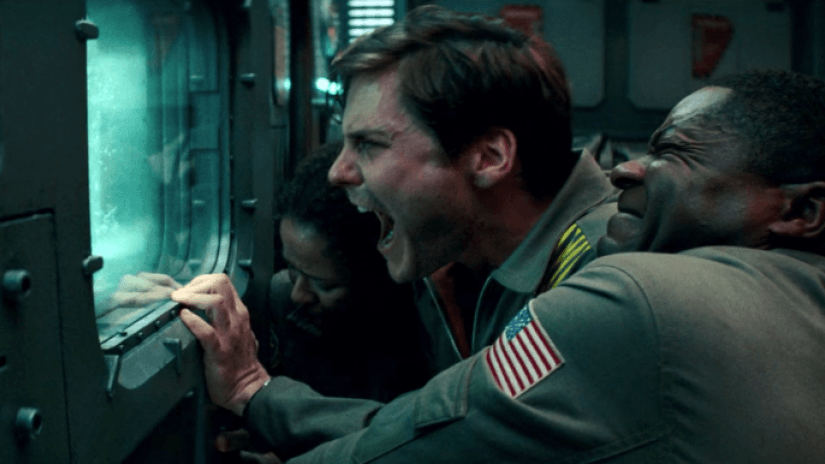 The point I am making (as I am still just making one simple point here with this massive spill) is that The Cloverfield Paradox doesn’t know which it is leaning more towards; being its own film, or being a direct sequel to the other films and worrying too much about bringing it together, and in the end, it kind of fails at both.
It is not a bad film, but like a lot of things recently (games and movies mainly), it is just a little forgettable. Where as the original Cloverfield is memorable, and even the sequel was to an extent (just not as memorable), this sequel will drift off into the vast empty darkness of space, never to be seen again after you have watched it once. It may be remembered for the fact that it did just suddenly pop up out of nowhere, but I can see Netflix doing this a few more times before its day in the sun has passed.

So, the film itself is about how the Earth is running out power and a group of scientist/engineer/astronauts are up in the Cloverfield space-station (ah! Linkage) and are going to be using some experimental a particle accelerator to try to solve Earth’s energy crisis. That is the basic idea. Each member of the crew is from a different nationality and has 1 key defining characteristic which splits them apart from one another, and this is pretty much the basis for their character during the entire movie. While the actors are fine and do the best with what they have, there is not enough screen time for any of them other than the lead woman. She is reasonably fleshed out, but we only learn a key motivation for her incredibly late in the movie, almost as if was written in after they had finished filming 2 thirds of the film, but overall she did okay.
The other characters are a little cliché, such as the heroic American, the Irish comedian (naturally played by Chris O’Dowd, because if you need an Irishman, fuck it, get Chris O’Dowd), as well as a Chinese woman (who at one point asks for dumplings), a shifty Russian, and Daniel Brühl playing the German scientist of the group. I think there might have been a couple more, but these were completely forgettable.
There were some amusing bits involving the arm of one of the characters, but then they must have realised it was funny and ended up milking it for all it was worth.
There is also a moment when one character “sacrifices’ himself, but it seems a bit out of the blue and prior to this, we have had no hint that he would even do it. Really any character could have done it, as they were all as unmemorable as one another. 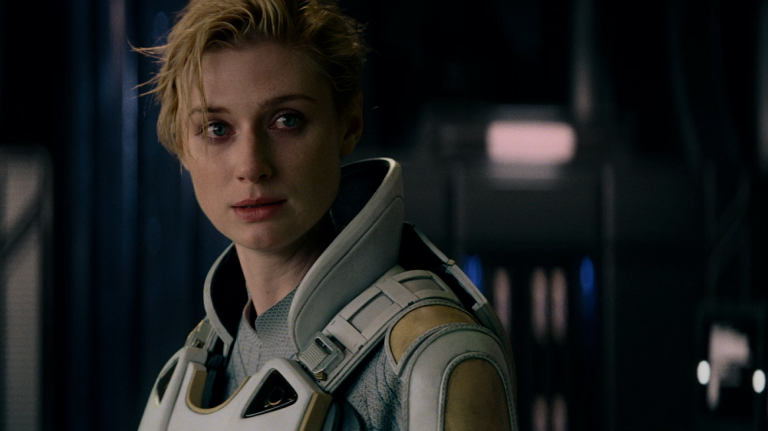 Anyway, going back to the story, the crew fire up the particle accelerator and all shit kicks off. I won’t say exactly what happens, as part of the thing I enjoyed about the movie is unrevealing the mystery behind it all. I will say that the reason behind it all does not give them justification to do whatever they like. A few bits in the film were confusing (and have lead to a lot of back draft from people online), such as the arm in the wall, the arm itself, the stuff that grabs the guy near the end of the film, and how the worms got in there!
In fact, I am thinking back now and there was a lot more that cannot be explained by the story of this film. I cannot say this without spoiling the movie, so come and speak to me in the comments or on Facebook if you want to know more of my qualms with this film.

Before they launch the particle accelerator, they watch an interview with a writer who has predicted what will happen, as well as rubbing our nose in the answers of the other two films, blatantly explaining it all within the first 10 minutes of the film. It was silly and unnecessary. This film would have done a lot better if they hadn’t been so blatant and just left it up to our imaginations and fan theories.

At first you expect the film to be a science fiction horror, which is what drew me into it regardless of terrible reviews, and there are some good moments that are built up nicely, but they ultimately failed to deliver. That is the key thing to take away from The Cloverfield Paradox; the film builds up quite nicely (even if it does blatantly throw together some wishy-washy reasoning for the events of the previous films), but it does flops in most aspects about halfway through.

One last thing I would like to say is that part of the story is set back on Earth and follows one of the scientist/astronaut’s partners as they struggle with a Cloverfield-esc situation occurring, but we never truly see what is going on (unless of course you include the blatant return of something in the final moment of the film – which I am sure you can guess what I am getting at). These scenes, while they could have been good if they were their own movie, feel unnecessary other than as a plot device to fuel the final scene, before that they take us away from the main story too drastically, and its whole reason for existing feels irrelevant. 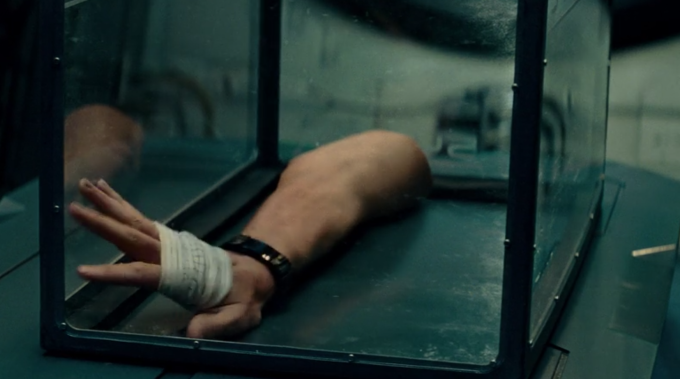 Overall, at a run time of an hour and a half, The Cloverfield Paradox tries to fit too much in, in an attempt to bulk out what little the story really is. It is a colossal miss-fire and it is clear why this was a straight to Netflix film, rather than a theatrical release like the previous films in this series.
It is not a bad film, even though this review seems to have torn it apart. The truth of the matter is that it is just a bit forgettable the moment it has finished. I started this review yesterday and intended on finishing it today, but I completely forgot that this review even existed, and sadly, the latest installment of the Cloverfield series is just like this.
It has a fine cast who just have so little to work with, an okay story, which raises more questions than answers, and the film doesn’t know what it wants to be, which, in the end, makes it spread too thin on all accounts.
The film is a good idea that is not well executed. It could have been so much more as it had fantastic potential. If you enjoy science fiction films, then you can do a LOT worse than The Cloverfield Paradox, but, you can also do so, so, so much better.