Guardians of the Galaxy Vol.2 – Review 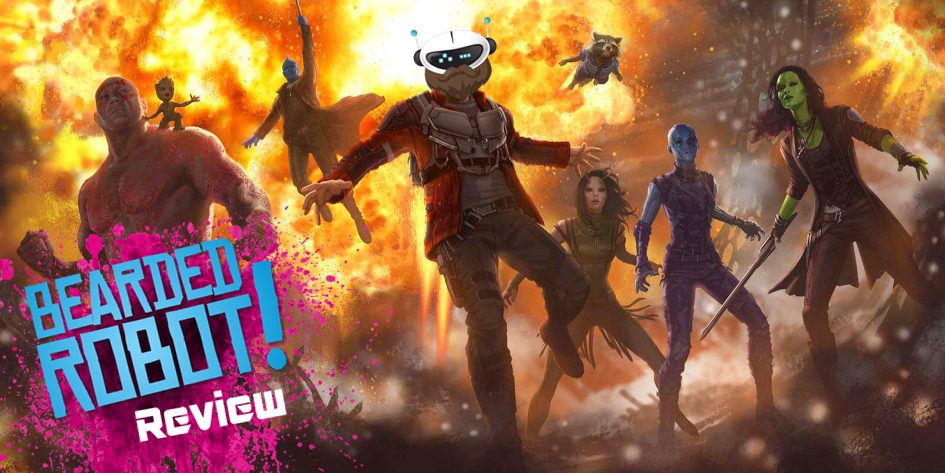 My biggest issue with the Guardians of the Galaxy is that I am unsure as to which Guardian is my favourite. Maybe it is Drax… or… or maybe it is Baby Groot? No… no definitely Rocket.
The problem with writing a review to a film that I think is good, is that if you say a film is good, most of the time people will go “oh it’s good”, but if you say a film is bad, then you have to justify as to why you think it is bad. So this film will be a harder write.
I know I am a little late to the party with this one, as most people who are going to see Guardians of the Galaxy 2 will have already seen it (some multiple times) so I don’t really know who this review is for?

Anyway, the original GotG came completely out of left field for me back in 2014. I had missed it at the cinema and I did not know the source material. When I finally did come to watching it, I thought it was brilliant. An excellent mix of comedy and action with loveable characters. This meant that the sequel had pros and cons from the get-go.
The pros being that I already knew I was going to like it as long as it stuck to the same principals as the original. The cons being that it did have big shoes to fill, more so if it tried to attempt to surpass the original (a title only few films have ever achieved).

Unfortunately it did not surpass the first film, although no one really expected it to. One of the few problems I had with this film was that it never really had a major plot until about 50 minutes towards the end. In the build up it kind of felt like small sub stories that were just randomly strung together. Whilst not a bad thing, as it gave us the chance to see the Guardians in different situations and sometimes split up from one another to focus on them individually, but if there was a main plot for the first two thirds of the film, we might have been eager to see it through. Instead we are left wondering where all of this is going. As I said this is only a small issue and doesn’t really matter too much.

Much like the original, GotG2 was a brilliant mixture of great action scenes (both in space and on the ground, with each character getting to show off their own special way of fighting), quality old school music, as well as being hilarious mostly throughout the film. While 90% of the jokes hit, a few of them seem a little forced. Often the ones involving Yondu’s mate.
This is mainly down to the fact that the film makers wanted to recreate the magic of the original. They wanted to tick all of the boxes (which is why ultimately the plot has been left a bit out in this one), and so it had the comedy, and it had the moments that made the original great; Drax laughing at everything, and Chris Pratt being… well Chris Pratt, even down to having Rocket’s “Oh yeah!” line that felt like a beautiful moment in the first film.
But again, these issues are just me nitpicking as it is easier to write a bad review than a good one. Nobody wants to read me write a load of arse kissing. Which is what I will now do.

The cast were all brilliant. They really hit the nail on the head with the characters. (You’ll have to forgive if I misspell them or do not know a few exact names… some fanboy aye ?)
Gommora is probably the weakest one of the Guardians. The actress is good at the role, but the character is a bit flat and not overly interesting. Her sister on the other hand is excellent. A total badass who you can’t help but want to see in action, even if she is a villain.
Chris Pratt is playing the same role he often plays. However it feels more at home here than say in Jurassic World. Him and Rocket’s back and forth were very enjoyable, as well as Starlord’s little comments whenever an embarrassed moment occurred (again maybe happening a little too often due to the fact it was funny in the original)
Drax was brilliant. Nearly every time he opened his mouth you couldn’t help but laugh.
Rocket the Raccoon is another excellent character. Anytime he was on screen you couldn’t help but want his scenes to go on a little longer. The CGI of his character was amazing. You could see each of his individual hairs and he reminded me of my cat, if Rocket was orange.
Baby Groot was a character you could tell that EVERYONE was automatically going to love because of his cuteness, and being the hipster that I am, I always try to distance myself from that, however you cannot help but fall in love with Baby Groot. One scene where he runs into some difficulty, you are thinking “oh no! Not baby Groot!”. The film makers knew exactly what they were doing with him and for that I tip my hat to them.
Mantis was another great character. Her confusion of what people are truly saying made for some excellent comedy moments.
Kurt Russell was a very interesting character. His story ties in with the main plot of the film (once it gets going) so I can’t say too much. But being a massive Kurt Russell fan, I always enjoy his work. So maybe I am a little bias.
Finally we have Michael Rooker’s Yondu. Who probably stole the show for me. He is a very deep character, showing us just how good Michael Rooker is as an actor. His character is on his own personal journey that is enjoyable throughout the entirety of the film.

So, in conclusion, Guardians of the Galaxy 2 is exactly what you expect of it. It is more of the same things that made the original movie great, and while that doesn’t always work for every film, it certainly does with this one. Great action, excellent music, funny parts throughout and some really good cameos for all the marvel and comic book fans. While you don’t need to have seen all the other films in the Marvel cinematic universe, you will need to see the original before this one to fully appreciate it, although being everything that was good about the first film, it is also this films biggest issue, but even that is not really much of an issue at all.

Any issues I had with this film were nothing more than merely a solitary stars burning millions of miles away on the backdrop of the vast expanse of the galaxy.