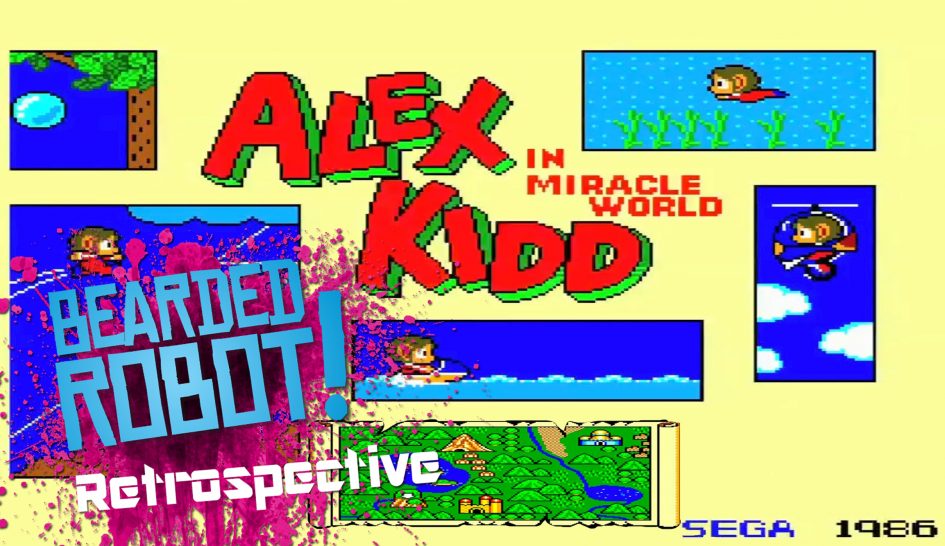 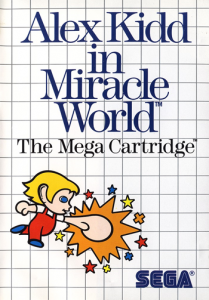 Something I’m always thankful for YouTube for taking us back on a nostalgia trip of gaming, and I had this very feeling last night watching a speed-run of Alex Kidd in Miracle World.

This game was HARD. It may have looked very simplistic, bright and colourful, but this was one of the toughest, most unforgiving games I’d ever played! I have to sadly confess that I’d never even managed to complete it (which always annoys me when watching YouTube as some people make it look a breeze!)

The Sega Master System II was mine and my brothers first ‘proper’ current console of the time (once the Commodore 64 had given up the ghost). Alex Kidd in Miracle World was built in to the console, so until the next Birthday or Christmas, this was all we’d be playing! I have such great memories of the music and sound effects.

It’s a really simple game. The main protagonist could run, jump and punch, all whilst collecting bags of coins and punching yellow glass boxes… Not dissimilar to Super Mario Bros really. The very first level runs top to bottom as opposed to side scrolling, until you land in the always difficult water level below. You start with 3 lives as most games did, however, one mis-timed punch will cost you one of those lives (none of this flashing whilst frantically grabbing more rings routine that Sonic allowed!) Of course along the way you could grab things to make life a little easier, like a Power Ring or a walking stick that enabled you to float.

The story of the game was again very simple; you need to save your son and his fiancé from Janken the Great and save the kingdom of Radaxian. Along the way you encounter Janken’s henchman and have to beat them in a game of Rock, Paper, Scissors, so it’s all down to chance and how quickly you can change your mind at the last second! 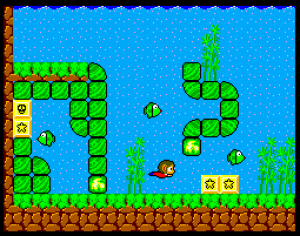 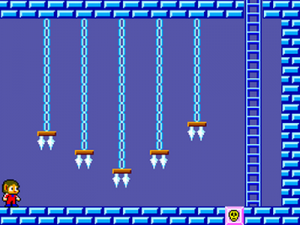 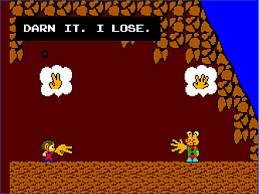 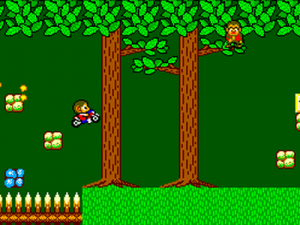 The levels of course only get more and more tricky as you make your way to the final castle. You need to navigate your way through some of the levels using a ridiculously speedy motorbike or a peddle helicopter (both of which you need to buy from the shop, so those bags of coins are crucial!) If you can’t afford to buy these then it is course possible to continue on foot, but you will miss out on cool things like simply running over your enemies or shooting at them (both much better options than getting up close and punching them!)  The second of the peddle-copter levels sees you trying to navigate your way around floating platforms made up of red and white balls. The white balls are breakable by shooting them, however hitting the red ones will cost you your peddle-copter, causing you to drop into the sea and continue underwater.

As well as the helpful transport, you need to make sure you have enough money to buy the helpful items, such as the Power Ring and the invincibility Powder. The Power Ring could sometimes be obtained by punching a ‘?’ box if you come across one, but this can always be risky… Sometimes these boxes contain a small purple ghost who WILL follow you wherever you go… get that screen scrolling across quickly to lose him! Extra lives can also be purchased at the shop which are definitely needed. You won’t often come across them on the levels unless they’re in a place that’s likely to cost you a life by trying to get it. The game is harsh!

The game also had one of those elusive Easter eggs that you would often hear about, either by word of mouth or hints and tips sections in magazines (no Google back then people!) I can confirm that it does indeed work, after all there was nothing more disappointing than rushing home to try out something you’d heard, only for it to be a load of rubbish. There was a section on the underwater level where a squid type creature would wave his one long tentacle back and forth, making him quite tricky to swim past. You could attempt to punch his tentacle away piece by piece until you’re right down by the pot that he sits in. You then punch the pot and get whisked into a room full of coins, brilliant!

As I’d mentioned before, I’d never actually managed to finish this game in it’s entirety, however thanks to YouTube I was finally able to see the ending that I’d always missed out on… Well, to say it’s a complete anticlimax would be an understatement! There’s no cool little animation to show you how everything pans out… just a lot of reading to do followed by THE END. They really knew how to treat your gaming accomplishments back then!

Ending aside, this is a great little game and definitely one to take on if you fancy a challenge that’s easy on the eye. It was a huge part of my childhood and for that I will always be grateful!